We Have an Issue: Drink It In After last week's teeth-grinding, I for one feel a little lighter in my step, and I suspect you do too. Turns out we can have good things. Like a president-elect who radiates decency. A vice president-elect whose very existence represents so many fist-pumping firsts. Promising news of a vaccine in development. And, closer to home, crisp sunny days, cardigan nights, magnificent fall colors, and the softly arriving six-month stretch that marks the very best of Austin weather – the reason most of us put up with the other half of the year that is summer.

Did you see what I did there? "Best of Austin." Readers finely tuned into the circadian rhythms of the Chronicle know that this issue, the one immediately following the November election, has lately become the spot where we unveil our annual "Best of Austin" awards. It's a local institution – last year's was our 30th outing – and a mammoth undertaking. The whole thing usually takes about three months to put together: two rounds of readers' ballots wherein y'all tell us where to find the best burgers, the best plumbers, pretty much the best everything in town; multiple rounds of in-house critics picks, where Chronicle staff get to fill in the cracks and hand out our quirkier superlatives; a hundred or so photo assignments scattered all over the city; and so many collective hours of writing, editing, proofing, and production and web design. As we mulled how to pull that off during a pandemic, when the office has been closed since March and, oh yeah, we didn't want to do anything to slow the postal service down this fall, it kinda felt like the worst time to push out our biggest, best-read issue of the year. So! We're moving "Best of Austin" to May, which means the first ballot runs in February. And that means now is the time when you do your research. A lot has changed, friends. Try somewhere new, and check back in with old favorites. I'm certain they can all use the business.

So no "Best of Austin" this issue – will you settle for some best beer? Chronicle beer columnist Eric Puga started issuing his brewery power rankings in 2017, and every iteration gets more sprawling: Turns out there's a lot of good beer in these parts, and you couldn't find a better champion of it than Puga. (He's also deeply funny; did you catch his September story about surviving quarantine by drinking in the shower?) Check out his Top 10 write-ups starting on p.36; you can find the next 10 beers with the story online at austinchronicle.com/food.

By the way, not to blow our own trumpet (wait, no, that's exactly what I'm doing): This is a damn good issue. We've got the news staff drilling deeper into local election results and what they mean for the run-offs; Council Member Greg Casar has his own takeaway on that in this week's op-ed. The music department runs the gamut with an excerpt from Willie and Bobbie Nelson's new memoir, Kevin Curtin's firsthand toe-dip back into record store browsing, and Rachel Rascoe's really thoughtful conversation with the Longhorn Band members making the case for retiring "The Eyes of Texas." Arts Editor Robert Faires spotlights the arresting work of muralist Federico Archuleta; his work will be part of the Austin Studio Tour, Big Medium's mashing together of calendar staples EAST and WEST into a hybrid of virtual and outdoor exhibitions, starting this Saturday. (We've got intel on another seasonal rite, Mozart's Holiday Light Show, on p.22.) And if you're like me, you've been bathing in nostalgia during quarantine (hello, films of Tom Hanks circa 1992-2002!); you're gonna want to check out Screens Editor Richard Whittaker's interview with the filmmakers behind a new doc about the only cable channel Eighties kids cared about: Nickelodeon. 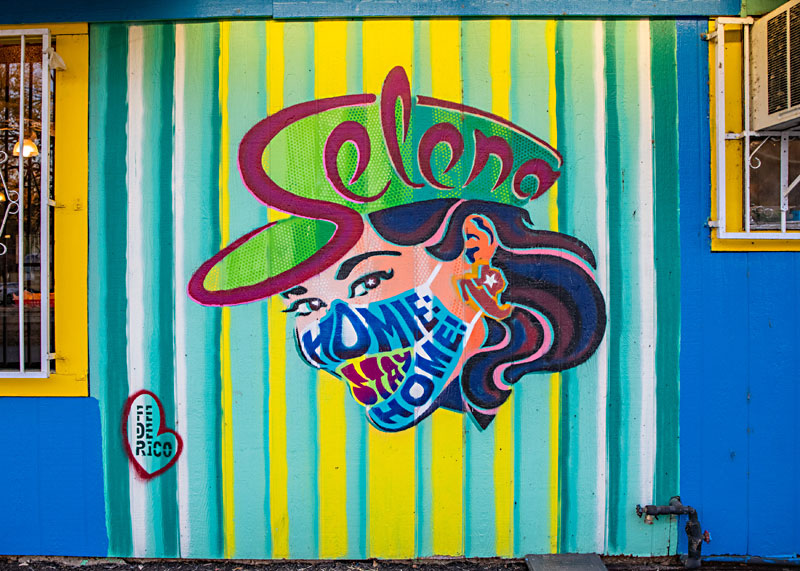 Wondering where to find El Federico's murals, like his Selena at Taqueria Chapala, around town? Check out austinchronicle.com/photos. (Photo by David Brendan Hall)
More We Have an Issue columns