Since the quarantine began, my wife has been even more stressed out and angry than she normally is, which is a lot. She gets angry at me for the littlest things, like not washing my coffee mug or letting my laundry go for a few days. I am a good husband I think. I help out with housework, help the kids with their online classes, and take care of the lawn, the trash, the bills, and our cars. Even still, whatever I do, it's not good enough or not done to her satisfaction. She has always been this way but lately it has gotten really bad. She seems to be always mad at me or the kids and it is really wearing on us. I suggested that she talk to a therapist about her anger issues, but that only made her angrier. I really care about her, but I don't want to live this way. What can I do to get her to chill out? Don't say sex because that is off the table. I'm not sure I even like her enough to have sex with her right now.

The only way to save your marriage is to find the courage to fuck your wife. See? I didn't say sex! Your wish is my command! Even though I'd like to take credit for that bon mot of matrimonial wisdom, it's pretty much standard boilerplate for any couples counseling session. I know that's probably an insanely frustrating thing to hear given your situation. I think we can both agree that the biomechanical aspects of intercourse are fairly simple. It's the psychological shit that is the real boner killer, and nobody really likes to have their head examined.

It's sort of crazy when you think about it. We're all more than willing to assume that our bodies are flawed in countless ways. We go to the gym, endure crazy diets, wack haircuts, botched botox injections, and all manner of fucked up shit because we're insecure about our looks, but the moment someone starts questioning our mind, we get all cranky and defensive. That makes no goddamned sense, does it? After all, nearly every mistake we make begins with mistaken thinking. Going on statistics alone, our minds shouldn't be nearly as cocky as they are, but minds don't GAF about statistics. Minds seem to be happiest when they're not doing a lot of thinking – like when you're listening to Kid Rock ... or watching the Kardashians ... or midorgasm. If you doubt what I am saying just pop a selfie when engaged in any of the preceding. That is what your face looks like when your brain has totally checked out.

I think it's safe to say that your wife has exacting standards – or at least strong expectations that aren't being met. The good news is that it doesn't sound like you're beating yourself up too much about constantly falling short of the mark. That's a good start. Ramping up your anxiety and annoyance is not going to help the situation. I know it's hard not to react negatively when you're getting shit on all the time, but the only true solution to your problem is to ease your wife's anxiety – in whatever way you can. I know you're probably not going to cough up a coronavirus cure, but you can sit down and talk to her about what you can do to ease her stress level. I know that seems like just asking for an ass whuppin', but you have to start somewhere. If you try to guess what will make her happy, you'll very likely guess wrong. Plus, sometimes simply outlining a positive outcome can go a long way toward making it happen. All that said, keeping your cool in the face of withering criticism is an act of heroism that not everyone is up to, so don't expect too much too soon. This is going to be a long haul. You could maybe start by talking about what it would take to resume your sex life. All the experts agree that's the key to a healthy relationship, regardless of how ridiculous you look midorgasm. 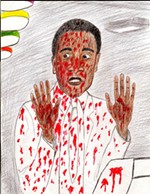 The Luv Doc: A White Suit
You can never be underdressed.