The defining characteristic of all right wing nut jobs 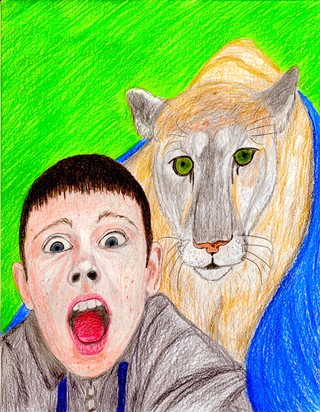 I am the mother of a 10-year-old Caucasian boy and I am scared to death I might screw up somehow and end up with a troubled young man like the Kenosha shooter. What can I do to make sure that doesn't happen to my beautiful, sweet, sensitive son?

You can start by teaching him not to be scared. I am not saying you should strap him to a pair of rocket skates or make him sleep with a mountain lion – though now that I think about it, he would be a goddamn boss if he survived. No, the fear I am talking about is a bit more dangerous and much more common. It's the defining characteristic of all right-wing nutjobs and pretty much nutjobs in general. They're afraid of foreigners, people of color, gay people, women, atheists, socialists, intellectuals, artists, nerds, anal-probing space aliens ... basically anyone you would want to put on a guest list for a really good house party. Why? Ignorance.

Please note I didn't say stupidity. Yes, there are plenty of stupid people – one of whom unfortunately is entrusted with the nuclear launch codes – but it would be a mistake to assume all or even most right-wing crazies are stupid; far from it. What they are is ignorant. Although the two often go hand-in-hand, it is entirely possible to be ignorant without being intellectually deficient in some manner.

For instance: Someone might possess the knowledge to completely disassemble and reassemble a big block Chevy engine but be utterly incapable of scratching out a few paragraphs of intelligible prose. Now, some might say, "That's OK. The world needs ditch diggers too." That statement is only partially true. Yes the world needs ditch diggers – I've dug a few myself – but what the world doesn't need is a whole bunch of ditch diggers who don't have the basic erudition to function in a modern society.

Guess what? The modern world is complicated ... and diverse ... and yes, intellectually challenging on occasion. Truth be told, most people just want to live their lives without having to put up with a bunch of shit they don't understand and don't want to, but unfortunately technology has robbed us of the luxury of being able to live in some anachronistic shithole where the only thing that changes is the diminishing gene pool.

So, what I am saying is you need to educate the boy – broadly – so he can empathize with a wide range of people; so he can understand a broad range of topics; so he can look at the world with a sense of wonderment and possibility instead of a sense of dread. Most importantly you need to teach him to love – not only himself and his family, but other people as well, to see each person as an opportunity for further enlightenment and connection. Teach him to define himself not by what he hates, but by what he loves. Cherish and celebrate his enthusiasm. Let him dork out in every way he can imagine and encourage him to share that love with the world. Also, you might want to get him a good helmet, because he's probably going to find that pair of rocket skates with or without you.