The personal grooming equivalent of buying a crotch rocket 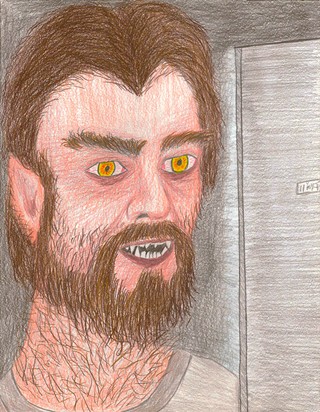 I think my husband might be a werewolf. Now hold on, just hear me out. In the last four months he has been growing hair in strange new places – like the bottom of his neck. He also stays up really late after everyone has gone to sleep. I woke up one night and found him growling and cursing angrily at his computer screen in the den. He said he was playing Fortnite? Fournight? Forthnight? Is that some sort of werewolf thing? It was spooky seeing his hulking, raging, hairy necked silhouette in the dark. He has also begun to smell extra gamey. I think it's because he only wants to eat meat – the more processed the better. He really likes to snap into a SlimJim! I know a lot of people are concerned about this coronavirus thing, but I am much more concerned about me and my children's safety when the next full moon comes around.

That sounds like a dangerous situation. Even if your husband isn't actually a werewolf, anyone who lets lower neck hair grow unchecked is seriously unhinged. People often talk about stained sweatpants, Crocs and socks, and coffee-stained teeth as being reliable signs of someone who has given up on life, but I would posit that rampant, untamed lower neck hair is a sure sign of someone who has already mentally shuffled off their mortal coil. It's the personal grooming equivalent of buying a crotch rocket. It just screams IDGAF – only without the abbrev.

So yeah, sketchy situation there already – and one you should monitor closely. The next full moon is on August 3, so you only have a few days to get your shit together. It's a Sturgeon Moon – named after a nearly extinct greenish-gray fish with a pointed snout that inhabits lakes in the northern U.S. and Canada. While in short supply, sturgeons are exceptionally long-lived. The female of the species can have a lifespan of up to 150 years. They're kind of the vampires of the freshwater aquatic world. Maybe that's a good sign, but I wouldn't rest too easy with a nocturnal, lower-neck-haired beast living in your midst.

In fact, if you plan on getting any sleep at all you might want to do it on a lofty nest of wolf's bane, also known as aconite, monkshood, leopard's bane, mousebane, women's bane, devil's helmet, queen of poisons, or blue rocket. Ask for it by name! Actually, you might want to avoid asking for the devil's helmet or the blue rocket because a lot of garden store employees are in the viagra demographic and might be confused by your request. Just call it by its Latin name: Aconitum. Truth be told, I don't really know how much wolf's bane you can reasonably expect to acquire before the Sturgeon Moon and besides, running all over town trying to stock up on wolf's bane might make for a really manic Monday.

Fortunately for you, I slid down a few subreddit wormholes and came up with what I think might be a workable solution for your situation: a Super Soaker filled with holy water. Easy peasy lemon squeezy! All you need to do is take a few empty water bottles to your local Catholic church and fill them up with holy water from the baptismal font, which is usually located near the entrance to the sanctuary – and BT dubs, the baptismal font is placed there purposefully because it is symbolic of the way that Christians enter the faith – through baptism. The Gospel (aka Good News) about holy water is that everything it touches becomes holy, so theoretically at least, you will be getting a lifetime's supply of holy water! That should be more than enough to fill up an arsenal of Super Soakers – enough to keep your local werewolf at bay for an eternity ... well ... as long as you don't fall asleep, but you GOT THIS. If you needed sleep you wouldn't have had kids in the first place, would you? The Luv Doc: Big, Dumb & Inexplicably Lucky
How about some empathy for the simpletons?