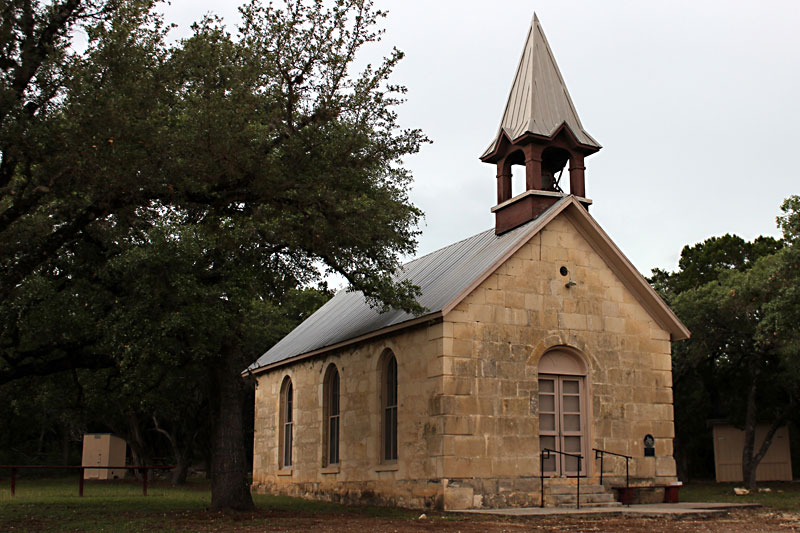 Polly's Chapel stands in a heavily wooded area along Privilege Creek near Bandera. The limestone church is among the last remnants of a once thriving settlement.

José Policarpio "Polly" Rodriguez, a military scout, Texas Ranger, justice of the peace, and circuit-riding Methodist minister, built the small rough-hewn stone church on his ranch in 1879. All that remains of the ghost town of Polly, Texas, are the chapel, a one-room school, cemetery, general store and post office, the few remaining homes, and Rodriguez's home, now in ruins but once called "The Fort" because of its stout construction. Born in 1829 in Zaragoza, Mexico, across the Rio Grande from Eagle Pass, Rodriguez came from a well-to-do and educated ranching family. His quest for youthful adventure led him to hire on as a civilian scout for Robert E. Lee and Albert Sidney Johnson on the Texas frontier.

During the Civil War he served in the home guard. After the war he became a successful rancher in Bandera County, acquiring more than 4,000 acres.

Until his death in 1914, Rodriguez encouraged settlement in the lush valley northeast of Bandera. Legend has it that he built with his own hands the 1,024-square-foot stone chapel that is beautiful in its simplicity. He also donated the land and materials for the nearby stone schoolhouse that operated from 1892 until 1942. Today, Polly's Settlement is a registered state historic site. The chapel is rented for weddings and events. The school holds an open house once a year, usually in October. Area residents and descendants of Polly's nine children maintain the properties. For more info on this extraordinary Texan, see www.pollytexaspioneerassociation.org.

1,502nd in a series. Follow “Day Trips & Beyond,” a travel blog, at austinchronicle.com/daily/travel.