We Have an Issue: Habit Forming

Checking in with musicians in quarantine, #NowStreaminginAustin, Craft Brewers vs. COVID-19, and more new and recurring features 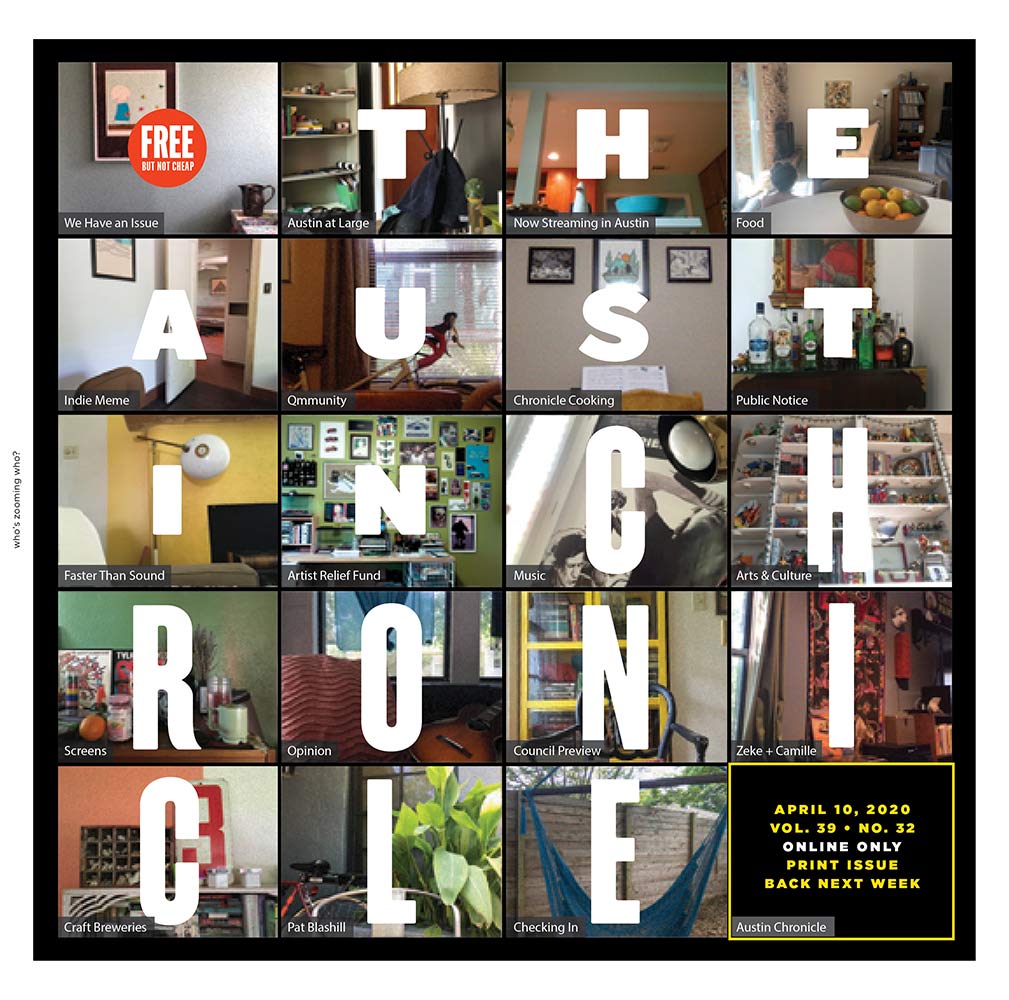 In another life, I thought a lot about habits – my bad habits, mostly – and read probably the same books as you about how long or how little it takes to rewire a brain to break those bad habits. These days I’ve come to think of habits as good things – how any small thing I can cling to as routine can be helpful. At the Chronicle, we’ve converted all our regular weekly meetings into teleconference ones, and even added more, and our stubbornly analog organization has dipped a toe into Slack, trying to re-create conversations around the coffeemaker in a channel where we share TV recos, recipes, and gallows humor.

Our Editorial staff is embracing a different kind of routine: I swear we’ve launched more recurring series in the last three weeks than we have in three months. In case you’ve missed any of them, here are some of our newest features:

Screens Editor Richard Whittaker is a guy who has an unlimited supply of 1) opinions, and 2) love for Austin’s film and TV scene. With recurring column “Now Streaming in Austin” he’s funneling both into daily viewing suggestions highlighting Austin-made productions – everything from big-budget comedy Miss Congeniality and Don Hertzfeldt’s gutting animated feature It’s Such a Beautiful Day to “The Paint Wizzard,” a short doc about an Austin housepainter challenging gender expectations, and Castlevania, the biggest animated show on Netflix right now. And on Thursdays, Richard’s going the extra mile (extra 280 characters?) by hosting live-tweet watches. He’s already tackled the original Texas Chain Saw Massacre and Quentin Tarantino’s Death Proof; next up is Robert Rodriguez’s Machete. Hit play at 8pm this Thursday, April 9, to watch along with Richard; find him at @YorkshireTX, and don’t forget that hashtag: #NowStreamingInAustin

Over at the Music desk, which has temporarily relocated to Music Editor Raoul Hernandez’s home office, Raoul has been checking in with Austin musicians to see how they’re weathering COVID-19. So far in his aptly named “Checking In” series, he’s heard from Carrie Rodriguez on putting her 4-year-old to work on her new web series A Song for You; Gina Chavez on livestream life and her new series Quaran-Gina Q&A; Mike Harmeier of Mike & the Moonpies on his shelter-in-place playlist; Michael C. Sharp on living lean and staying inside; Audrey Campbell of Pleasure Venom on what it’s like when your lease is up during a pandemic; Mike Melinoe on why this is an excellent time for folks to “work on what and who they are,” and also to listen to Sade; James Petralli of White Denim on some “curmudgeonly shit”; and Kevin Russell of Shinyribs on penning his PSA song, “Stay Home.”

Speaking of staying home: One routine a lot of people are turning to is the happy hour, enjoyed remotely with co-workers or friends via Zoom and FaceTime, or in a more private ritual shared with your fellow quarantine castaways, or just with yourself. I’ve made a habit of a 6pm iced chai latte – that’s on hiatus till next week’s grocery delivery; an icy cold beer is the chosen tonic of others. To that end, Chronicle beer beat reporter Eric Puga has been doing check-ins of his own, finding out how local breweries are responding to the crisis in his multipart series “Austin Craft Brewers vs. COVID-19,” including Austin Beerworks and Jester King and Vista Brewing and Hops and Grain, and Zilker Brewing and Nomadic Beerworks. Finally, if you haven’t hopped around our brand-new recipe hub, “Chronicle Cooking,” yet, give it a look. While sheltering-in-place, tending to my small vegetable garden and mining it for thoughtful meals has been the new routine that brings me the most pleasure. Samin Nosrat’s infallible focaccia recipe was already my go-to, and now I can’t wait to dive into Le Politique pastry chef Melissa Carroll’s riff on the recipe, which we posted last week. I’m lucky to already have on hand the ingredients: I’ve got rosemary from the garden, a half-full jar of olives in the fridge, and a newfound reserve of patience – perfect for breadmaking and, turns out, a pandemic.

Just a reminder, we’ve gone to a biweekly print schedule during shelter-in-place orders. We’ll be back on stands next week, but in the meantime, check out our second digital-only issue, featuring the latest city relief efforts, an interview with author/photographer Pat Blashill and an excerpt from his book Texas Is the Reason: The Mavericks of Lone Star Punk, new film reviews, and a whole mess more. We Have an Issue: Always Be Breaking (Especially in April)
A look back at the Chronicle's history of breaking big stories on April 1