There is a huge difference between encouragement and pressure.

I love my friends. They are fun people and that’s why we hang out together, but in the last few weeks we haven’t seen each other at all. But guess what? My friends are undeterred and are planning a big camping trip (keeping social distance, of course) at a nearby state park. As much as I would love to go, I don’t think it’s the right thing to do right now, so I haven’t responded to the invite. What I would like to respond is that no one should be going anywhere right now and especially not in a large group. Just because my friends are all relatively young and healthy doesn’t mean they aren’t putting others at risk. I think they already know that, but nobody wants to be the spoil-sport. So how can I miss this camp out and avoid becoming one myself.

One of the wonderful things about having a group of friends is the sense of community you develop over time. It’s nice being close and connected to people who share your interests, attitudes, and sensibilities, and even better when they support you in the aspects of your life that don’t intersect. Those friends are truly a blessing, so count yourself lucky.

However, friendships become unhealthy when you feel like you have to live up to the culture of the group in order to be accepted. There is a huge difference between encouragement and pressure. That may seem like semantic hair-splitting, but it’s not. Good friends encourage you to be your best self. Bad friends pressure you to be like them. If you don’t believe me, I have some terrible mullet pictures I would like to share with you.

In fact, mullets notwithstanding, some of the most idiotic things I have done in my life were the result of peer pressure … oh … and drugs and alcohol too, but I was peer-pressured into doing those as well - usually by some loser in a terrible mullet. Believe me, you might innocently indulge in the delights of trash-can punch the first time, but every subsequent indulgence is like playing a game of chicken with your esophagus.

In an abstract sense I guess it is possible to go camping and maintain social distancing. In fact, I often maintain a reasonable social distance from my camping friends for purely hygienic reasons. For some reason the people I go camping with see showering as a complete betrayal of the camping code whereas I see lack of showering as a complete betrayal of our primacy on the food chain. If you take a quick scan of a timeline of human history, you’ll notice the big advances didn’t really happen until people began bathing regularly.

Anyway, while I fully believe it is possible for a group of people to go camping and maintain social distancing - especially if they have vegan Frito-Chili Pie for dinner - it’s not realistic - at least not when compared to literally every single camping trip I have ever been on. Somebody will inevitably forget to bring something crucial - like matches, or a rain fly, or FUCKING COFFEE - which, as anyone who has gone camping knows is how you say coffee when you realize someone forgot it - usually at 7:15 in the morning when everyone else whose air mattress didn’t deflate in the middle of the night is trying to sleep off a wicked tequila hangover.

You’re absolutely right. Your friends - even if they are the granola-munching, backpacking, bottled-water-toting eagle scouts me and my friends like to make fun of when we’re camping - are being stupid, unrealistic, and selfish. I could bore you with all the reasons, but I think you already know. So go ahead and be the most thoughtful, conscientious, and compassionate person you can be and RSVP no. You … and hopefully as many other people as possible … will live to camp again. If they ostracize you for being a spoil-sport, they aren’t worth much as friends, are they? 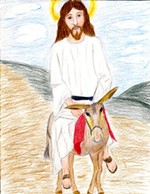 The Luv Doc: A Butt to Snuggle
Nobody ever said Jesus was an ass man 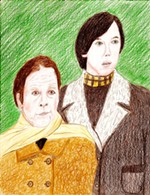