I have been cooped up with my husband and kids for five days now – supposedly “working from home” – and we are all about to murder each other. There is only so much Netflix binge-watching a family can do. How can we live at least somewhat harmoniously for the next few weeks/months?

I’m sure a traditional doctor would prescribe a dangerous cocktail of heavy sedatives for your situation, but thankfully for you I am not licensed or trained in the ways of Western medicine. In fact, I am not trained or certified in any kind of medicine, so if you want to load up on drugs, I’m not your guy. Besides, when we finally find ourselves in the dystopian hellscape that awaits us on the other side of this ruthlessly boring pandemic, you’re not going to want to be burdened by an expensive and debilitating drug addiction. You’ve got kids to feed.

Given that the global economic system seems on the brink of catastrophic collapse, I am going to recommend that we backpedal a bit from the materialism-will-save-us rhetoric and start doing some spiritual introspection.

First of all, be grateful that you still have a job and, ideally, some kind of income. A lot of folks in Austin have neither and no idea of when they will. Anything you can do to help them is going to put you in a much better frame of mind. Secondly, while it is no doubt sometimes relaxing and spiritually uplifting to enjoy some mindless downtime watching Netflix, you and your family are going to feel much better if you actually get off your asses and do something productive. At the very least, you could have a family meeting (look, I know these are real because I have seen them on The Brady Bunch) and talk about things you would like to accomplish in the upcoming weeks. Getting shit done gives you a sense of agency and purpose – which is especially valuable at a time when it seems like you’re completely at the whim of larger forces.

There is plenty of work to be done, and even if you feel like you don’t have any actual work to do, there is plenty of other stuff to do as well. For instance: The kids in the house next door to me have been practicing skateboard tricks in the street nonstop for what seems like weeks now. Every 10 seconds I hear a “klop!” – auditory evidence that one of them didn’t nail his trick. You would think that after so much failure they would have thrown in the towel, but no. They are out there right now klopping away. And you know what? At some point they are going to nail that trick and be the envy of some doe-eyed 12-year-old. That trick is something you’ll never be able to take away from them. The same, of course, could be said of learning to play the piano, painting, perfecting a sweet fadeaway jumper, or learning how to walk across a slackline without breaking your collarbone. These hard-earned gifts can’t be had by binge-watching Tiger King on Netflix, but I hear that show is dope as fuck anyway and you can’t be a hard-charger 24/7, can you? 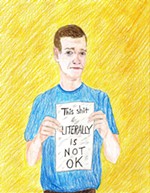 The Luv Doc: That Elusive Global Pandemic Silver Lining
A lot of nice things are going to come from this extended period of isolation 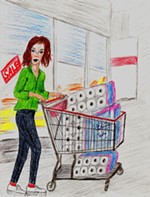 The Luv Doc: The Same Soft Consonants
The Luv Doc gives his two cents on a bunch of tiny goddamn freeloading chemical zombies