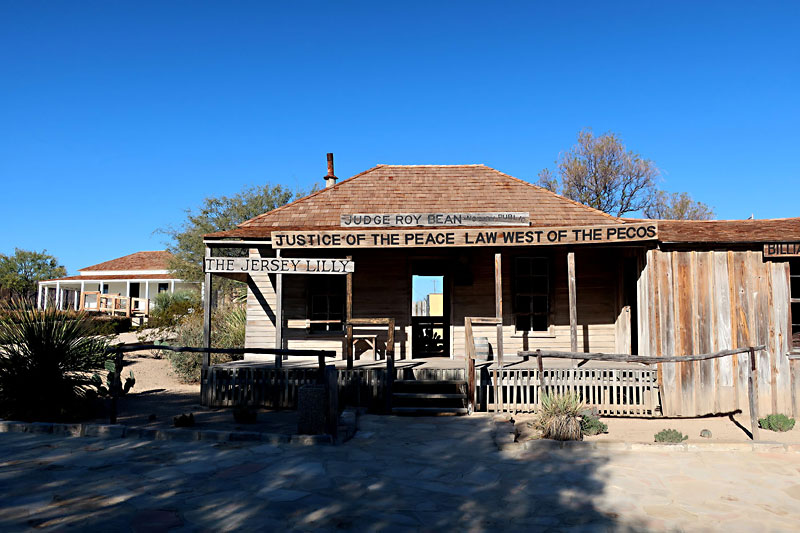 Langtry has an outsized place in Texas history, and it is due to the personality of one man. Judge Roy Bean was a big fish in a little pond. Two movies embellished the justice of the peace's life story and turned him into a folklore legend. As the "Law West of the Pecos," Bean was famous for rulings like fining a dead man $40 for carrying a concealed weapon. He acquitted a railroad worker for killing a Chinese laborer because Texas law didn't explicitly "make it illegal to kill a Chinaman."

Born in Kentucky, Bean headed west and ended up in San Antonio, where he got married and had four children. By 1882 he was serving drinks and dishing out frontier justice in a railroad camp on the Pecos River called Vinegarroon. Later, he moved to Eagle's Nest, renamed Langtry after a railroad foreman (not the actress Lillie Langtry as Bean claimed). For nearly 20 years, Bean dispensed whiskey and justice at the Jersey Lilly. After he died on March 16, 1903, the new owners of the bar and courtroom discovered the building was on railroad property. The landmark was relocated in the town with an official population of 30 and has been a tourist attraction and state visitor center since 1939.

Langtry is on U.S. 90, 60 miles west of Del Rio and about 5 hours from Austin. The visitor center opens daily from 8am to 5pm and includes travel information, the Jersey Lilly, Bean's home and opera house, a desert garden, and restrooms. For the best hamburger between the Devils and Pecos rivers, try J&P Bar and Grill in nearby Comstock.

1,490th in a series. Follow “Day Trips & Beyond,” a travel blog, at austinchronicle.com/daily/travel.