Valentine's Day is coming up and I need to make a decision. There is a guy in my office that I have been crushing on since he started to work last summer. I only see him occasionally, but I have learned from some of the people who work on his team that he is single and straight. My friend has been urging me to ask him out for drinks or for an after-work happy hour, but I have been putting it off because I am afraid he will say no. At the beginning of the year, she made me promise her I would ask him before Valentine's Day, which is coming up next Friday. I still haven't done it. So, what would be the best way to ask someone out who doesn't know you very well?

No presh, but by the time you read this, you will probably have about 18 hours to pop the question according to your self-imposed deadline. Look, I am not entirely opposed to deadlines. In fact, I am working under one right now (yeesh), but Valentine's Day, while all romantical and whatnot, probably isn't going to work in your favor in this case. Therefore, I am going to recommend that you ask this guy out on Monday. That way, your invitation won't have all the added emotional subtext of Valentine's Day tradition. Asking someone out on Valentine's Day is like wearing a giant "Love Me" sign on your chest. If you like to bet big, then by all means, go for it, but don't be surprised if your prey goes scampering away in terror. Monday, however, means that a leveler head prevailed ... that you took some time to think it over and aren't in a big hurry.

Besides, Valentine's Day is pretty sketch anyway. Why? Because it's basically a Christian reboot of an ancient Roman holiday/fertility festival called Lupercalia, the origins of which have been traced back to the sixth century BC when King Amulius ordered his twin nephews Remus and Romulus be thrown in the Tiber River, ostensibly to drown. Instead, a servant took pity on them and placed them in a basket and sent them down the Tiber where they were eventually taken in by a she-wolf and raised in a den at the base of the Palatine Hill where Rome was later founded ... by those same little foundling wolf boys. It's a heartwarming story until you get to the part where Romulus kills his brother and names the city after himself.

Over the years, Valentine scholars have speculated that St. Valentine's Day is basically a Christian cover-up for Lupercalia, which derives its name from the cave den in which Romulus and Remus were raised. The festival of Lupercalia involved the sacrifice of a goat and a dog, the bloody skins of which were then wielded by half-naked young men who ran through the streets whipping people with them. Pregnant women believed that the blood streaks from the whips would bring them healthy babies. By AD496, Pope Gelasius denounced the festival. My guess it was because of the color scheme ... and for the waste of dogs and goats.

Fast-forward a thousand years and Chaucer picked up the Valentine's ball by declaring February 14 "St. Valentinus Day for mating birds." After that, most of Christendom slowly got on the bandwagon until eventually an American graduate of Mount Holyoke College began mass-producing Valentine's cards featuring cupids and hearts. That pretty much sealed the deal. If you can't get God involved, capitalism is always happy to step in.

But I digress. If you want to use Valentine's Day as a convenient excuse to confess your heart's desire, you won't be the first. Rituals exist for a reason. I just think it's much more honest and vulnerable to do it without all the fanfare. For all we know, St. Valentine could have been beheaded on a Monday anyway, right? 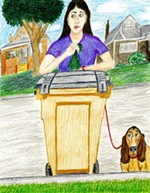