Hopefully it's a destination wedding

My boyfriend (fiancé) and I are getting married in late June and we are starting to go over the guest list. The wedding isn't going to be huge, but we are inviting 150 people, so we have to be somewhat selective. We tried to include as many family members as we could, but some got left off the list to accommodate close friends. One of the people we left off the list was my mom's stepfather. I did this intentionally because he always really creeped me out when I was growing up. He would say suggestive and inappropriate things to me and my sister and was always extra "handsy" with us. He wasn't necessarily mean, but I didn't like being around him, which is why I don't want him at my wedding. My mother is really upset with me. She says that's just the way he is and I am making a mountain out of a molehill. She says she is embarrassed and doesn't know what to tell him and my grandmother. I know this is uncomfortable, but I don't want him and the unpleasant memories he brings up at my wedding – especially since we are paying for it. Am I being unreasonable?

You're getting married in late June? Hopefully, it's a destination wedding – like in Glacier Park or maybe the Swiss Alps. Both of those places can be really pleasant at that time of year. Austin, on the other hand, could never be described as "pleasant" other than the few merciful spring days that SXSW has apparently purchased or the two weekends in the fall owned by Live Nation and C3. That's pretty much it for reliably pleasant weather. Otherwise, it's a crapshoot from late October to early April. Late June, however, is never a crapshoot. It's going to be steamy and miserable. Hopefully, you're getting hitched indoors, or at the very least in a swimming pool. If it's the latter, just think of how appreciative your bridesmaids must be! Who doesn't look good in an aquamarine chiffon bikini? Don't answer that.

Oh, and regarding not asking your step-grandfather to the wedding: You do you. You don't need me to give you the OK. I am sure you have probably already been tortured over the interfamilial ramifications of giving him the snub. Yes, your mother might be mortified at the thought that one of her parents isn't invited to her daughter's wedding, but ultimately the choice is yours. Perhaps this might be a good opportunity for her to discuss how his past behavior with you and your sister has affected your relationship with him as adults. My bet is that you might prefer she not discuss it with him at all. What's done is done, right?

Ideally, you will have a wonderful wedding surrounded by people you love and who love you enough to sweat through their dress clothes to watch you tie the knot. My bet is that even if your step-grandfather were invited to your wedding, you might not even notice. Those 149 other sweaty people will surely demand a huge amount of your time and attention. In the end, it's about what you can live with, and you know that far better than I do, so I say mazel tov with your matrimonial schvitz! Eventually Gramps will get over it, and even if he doesn't, I bet you won't mind. 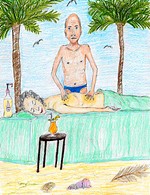 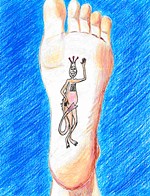