There is no reason to stand on principle 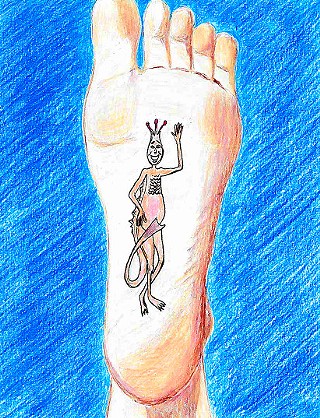 I am 34 years old and have never gotten a tattoo, even though many of my friends have. My current girlfriend has several and is always teasing me about getting a tattoo. Usually, it's playful, but sometimes I think she feels that me not having tattoos is some sort of statement against them. To be honest, I don't think I would mind having a tattoo, but I have never seen one that inspired me to get my own. Should I just get a small one so she will stop bugging me about it?

Yes, you should. Get a tattoo, I mean. What harm could it do? Especially something really small – like a life-sized flea on the bottom of your foot. I don't know about you, but I almost never see the bottom of my foot. For all I know, I already have a tattoo on the bottom of my foot. If I do, I hope it's something useful, like "Size 10 EEEE." I have never been unconscious in my podiatrist's office, but I did get my wisdom teeth removed, and that dude seemed sketchy as hell. Pretty sure he was a huffer.

So yes, get that tattoo, and once the bottom of your foot is indelibly inked with the likeness of a minuscule irritating vermin, I feel certain that your girlfriend's days of haranguing you about getting a tattoo will be over. You will then be on the tattoo team, and your guilty conscience about being unillustrated will be a thing of the past. Totally a win-win, don't you think?

There is no reason to stand on principle when instead you can be standing on a flea tattoo, grinning like a Cheshire cat anytime someone with full sleeves and a cluster of neck tattoos tries to call you out on your bare skin. Plus, when someone asks you to prove it, they have to look at the bottom of your foot, which is about as low as someone can get.

I can't imagine why you wouldn't be totally down with this idea, but if for some reason you think it's silly, you should go with whatever you think would fit on the bottom of your foot – maybe a ladybug or a tadpole, or better yet, a sea monkey. That would be dope as fuck, actually. Plus, "Sea Monkey Foot Tattoo" would make a great band name.