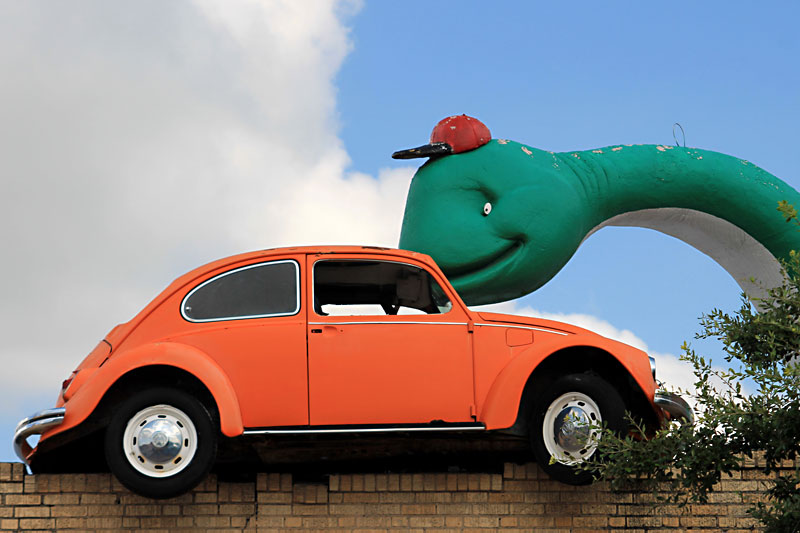 We were saddened by the news that our friend Bob "Daddy-O" Wade passed away on Dec. 23 at age 76. For the Nov. 6, 2009, "Day Trips" Wade took us on a narrated tour of his public art around Texas. As a remembrance of his irreverent and entertaining sculptures, here is an updated version of the original column.

A tour of Bob "Daddy-O" Wade's art takes in a pretty good swath of Texas. You can find his unique sculptures made of junkyard parts or shiny polyurethane in the most unusual places.

Austin-based Wade was one of those iconic Texas artists that you might not know by name, but you recognize his style of art – from the New Orleans Saints football helmet atop the Shoal Creek Saloon on Lamar Boulevard in Austin to the dancing frogs that once decorated a truck stop on I-35. "I'm so old that my stuff is being refurbished," Wade said in 2009. 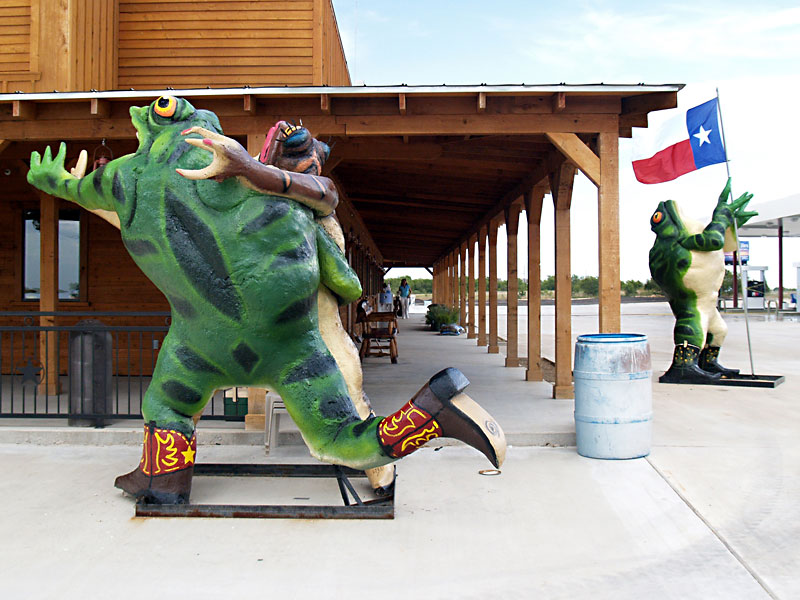 Austin has the largest concentration of Wade's public work. Besides the aforementioned football helmet, made from a Volkswagen body, there is the fish jumping out of the water at Hula Hut, a two-headed longhorn at the County Line restaurant, and the Ranch 616 restaurant's rattlesnake. Wade also made the "world's longest longhorn horns" currently hanging in the University of Texas Alumni Center.

Wade provided the following list of his art installations and commentary exclusively for "Day Trips" readers.

Abilene: Dinosaur Bob, National Center for Children's Illustrated Literature, 102 Cedar St. On the roof across the street from the museum, the sculpture is a rendition of the children's book character. When the owners announced plans to demolish the piece, citizens raised funds to refurbish the dinosaur and move it to its present location.

Waco: Funny Farm Family, the Art Center, 1300 College Dr. (on the McLennan Community College campus). A series of colorful bomb casings and steel, the still life was made in 1968 for HemisFair Park in San Antonio. Wade was an art instructor at the college in 1968. This is his first and oldest public art piece in Texas. There are plans to move the piece to a new sculpture garden at 701 S. Eighth St. 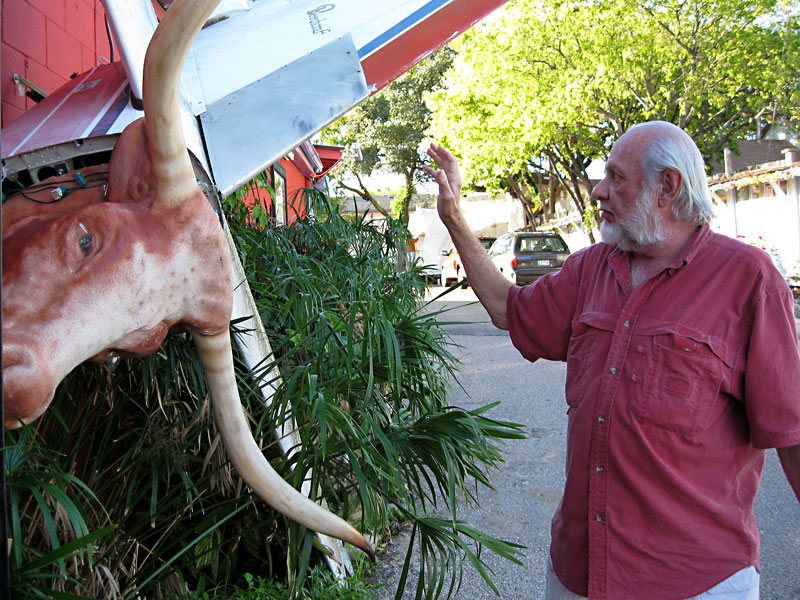 Dallas: Dancing Frogs, originally called Six Frogs Over Tango, the piece was done for the Tango nightclub in Dallas. After the club closed, the frogs were moved Carl's Corner near Hillsboro and survived the fire that destroyed the truck stop. Three of the frogs were sold to Chuy's in Houston and ultimately moved to a Chuy's in Nashville, Tenn. The other three frogs returned to the site of the Tango nightclub, 1827 Greenville Ave., where they are part of the décor of a Taco Cabana.  Wade also did the truck-shaped billboard north of the truck stop at Carl's Corner on I-35E and the wooden nickel on the east side of the highway.

Muleshoe: Giant Prickly Pear Cactus on the Roof, Leal's Mexican Restaurant, 1010 W. American Blvd. Wade built this life-like piece for a restaurant in Dallas. Coming back from New Mexico, he discovered the 30-foot-long cactus. He has no idea how it got there.

San Antonio: World's Largest Cowboy Boots, North Star Mall, Loop 410 at San Pedro.  The 35-foot-tall boots are more than 30 years old and were originally at the Washington, D.C. Arts Center. Junkyard Dog, Alamo City Inc., 1201 Somerset Rd. The base for the dog is a 1966 Plymouth Fury standing on end. It was built for a friend who quit being a lawyer to find honest work as a used car parts dealer, he said.

Del Rio: Giant Sixshooter, Humphrey's Gun Shop, 124 E. Garfield Ave. Wade was in town to give a lecture at the art center when he was asked to do a piece for the city. Made of a barrel, stove pipe, and stucco; the gun shop paid the expenses and uses the sculpture in its Internet ads.

Houston: Smokesax, was built for Billy Blues nightclub and was a landmark on Richmond Avenue near the Galleria for more than 20 years before being moved to the Orange Show for Visionary Art at 2401 Munger St. The saxophone was built on-site in three weeks using a Volkswagen body, oil field pipe, and a surfboard for the mouthpiece. The piece was to be moved to Sixth Street in Austin, but the building's new tenant decided to keep it.

Fort Worth: On June 1, 2010, Daddy-O's 40-foot-tall polyurethane iguana, Iggy the Iguana, landed on the roof of the herpetarium at the Fort Worth Zoo. This was after my conversation with Wade, but is worth including in this list of his greatest public works. Iggy, according to the Zoo, watched over the Lone Star Café in New York City for 13 years before being retired. In 1999, the green lizard was purchased by Lee M. Bass, who loaned it to the Zoo for its new herpetarium.

1,480th in a series. Follow “Day Trips & Beyond,” a travel blog, at austinchronicle.com/daily/travel.