Qmmunity: The Queer Stories That Made 2019

Looking back, enjoying gelato, and the return of Middle School Dance Party 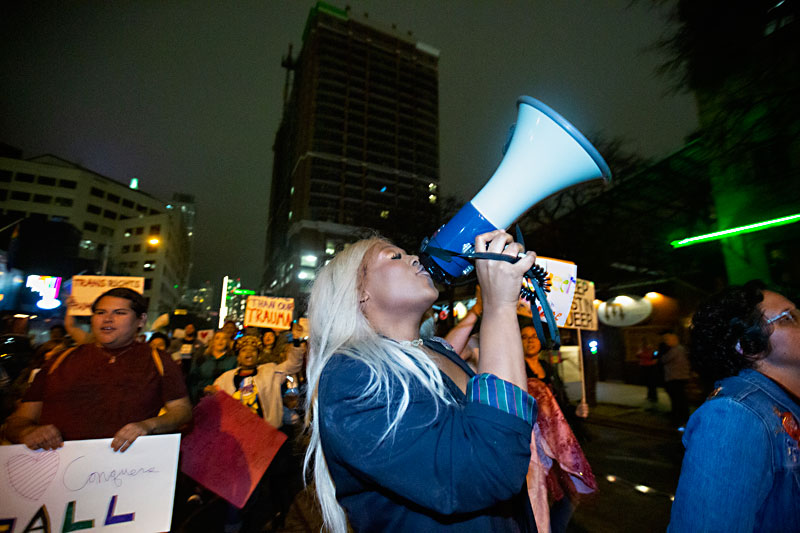 Activist Naomi Wilson fought for trans and queer rights at every turn this year. (Photo by Jana Birchum)

Back in January, it didn't occur to me that 2019 was closing out a decade. At midnight, I didn't realize this year marked the 50th anniversary of the Stonewall Riots, and I certainly wasn't paying attention to the other milestones the year would bring: OUTsider, Austin International Drag Fest, and HavenCon (three quirky, queer fests that not only keep Austin queer but put us on the inter/national queer hot spots map) all celebrated fifth anniversaries in 2019, while both the Capital City Men's Chorus (now Austin Gay Men's Chorus) and Equality Texas turned 30.

Today, it seems only fitting that so many noteworthy anniversaries were hit in the last year of – what do we even call this decade ... the late Aughts? A new decade ahead brings the promise (and, if the last 10 years offer any insight, the certainty) of change. I said it before, but I think 2019 ultimately brought back hope. In compiling this year's 10 biggest LGBTQ stories for Austin, I can't overlook the battles we lost this year – the hate crimes, the Chick-fil-A bill, the attacks on drag storytime, the murders of two trans women of color in Dallas – but I also watched and reported on how each of these attacks inspired people to fight back, form caucuses, hold vigils, and join forces to help stop future losses. Of course we'd fight back. If this decade has taught us anything it's that we can soar so high and still be cut down, but that will never stop us from rising again and again. So without further ado, Austin's 10 biggest queer stories of 2019. – Sarah Marloff

1) Fighting for a Better Austin: What better way to kick off this year's list than with a round of applause for the many people fighting like hell to make Austin – and, without sounding too cheesy, maybe even the world – a better place to live in. Which is why the Rainbow Patrol formed shortly after a hate crime rocked Fourth Street and the qmmunity. The entirely volunteer group, composed of queers and allies taking a stance against hate – created a "positive, non-violent, non-confrontational, de-escalation, protection squad" to keep queers safe Downtown. But that wasn't the only silver lining from the January 19 attack. More than a hundred qmmunity members took over Congress Avenue and the Capitol steps on February 1 to stand up against hate in our city. – S.M.

2) The Lege's First LGBTQ Caucus & Statewide Wins: 2019 was the year of finding out that heroes do exist in the form of first-ever LGBTQ Caucus in the Texas House of Representatives, which formed early on in the 86th Texas legislative session. Their powerful testimony rallied the queer masses, but human emotion didn't outweigh cheap fried food for GOP Chick-fil-A loyalists who pushed the religious freedom bill to protect homo/transphobic businesses forward until it was signed into law by Gov. Greg Abbott in May. Meanwhile the Caucus' five founding LGBTQ reps have spent the off season touring the state and sharing their message: Flip the House, turn Texas blue, and put some positive LGBTQ laws on the books; but that wasn't the only coalition of high-powered queers to make the news this year: Several LGBTQ chambers of commerce – Austin, Greater Houston, North Texas, and San Antonio – came together to form the historic Texas LGBTQ Chambers of Commerce, in a polite middle finger to the Lege. What a time to be queer and wear business suits. – James Scott

3) Conservatives Target Drag Queen Storytime: Pride month got off to a rocky start in Austin with not one but two Drag Queen Story Hour events falling into the clutches of bigots: one at Austin Public Library's Old Quarry branch being crashed by InfoWars, while another planned for the privately run Leander Public Library was canceled amid protests from city staff and others. But if there's one thing Austin's LGBTQ community knows how to do, it's showing up for a counterprotest, which is just the thing that happened when counterprotesters and allies outnumbered the protesters at Leander's Open Cathedral Church's Family Pride event that same month. – Beth Sullivan 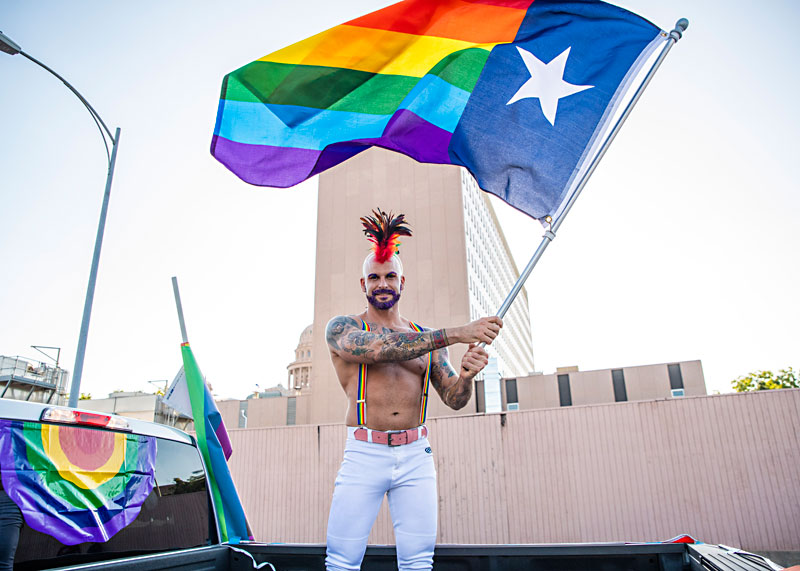 4) 50th Anniversary of the Stonewall Riots: 2019 was a landmark year for Pride celebrations both around the world and locally with the 50th anniversary of the Stonewall Riots – the long-held birth of the modern LGBTQ rights movement – and the 10th anniversary of Austin's alt-Pride march and party Queerbomb. Sure, Stonewall's anniversary was a reminder of just how far the LGBTQ rights movement has come in cities like New York and San Francisco, but for Qmmunity, we discovered Austin's own rich history of a thriving and politically organized LGBTQmmunity, which birthed such pivotal orgs like the Seventies' Gay Liberation Front and Austin Lesbian Organization, as well as allgo and the Transgender Education Network of Texas in later years. – B.S. 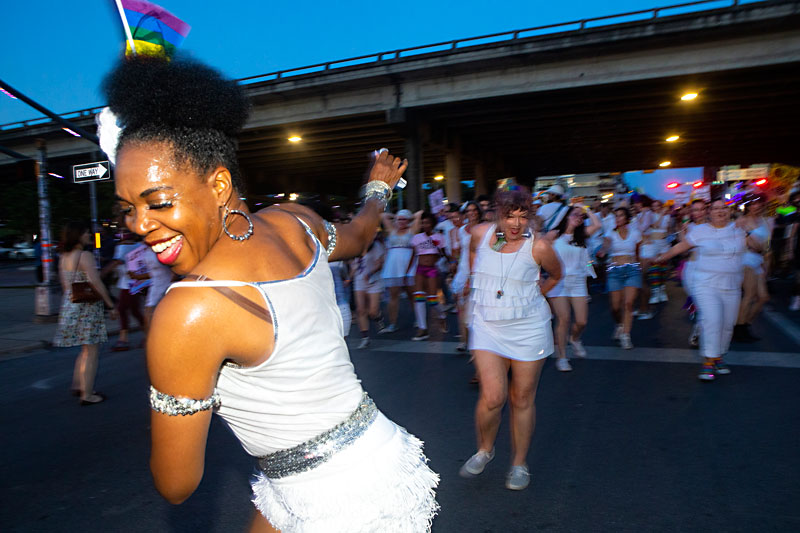 5) Caitlyn Jenner Donates Scholarship for Trans Former ROTC Student: Almost two years after President Trump first tweeted his desire to ban trans people from serving in the military, the administration implemented a new Department of Defense policy in April that banned most openly transgender service members. UT-Austin student Map Pesqueira made national headlines after losing his three-year ROTC scholarship under the ban; however, three months later, Pesqueira received a $25,000 scholarship from TV personality and former Olympian Caitlyn Jenner that would allow him to complete his undergraduate degree at UT. Though Jenner's personal politics have proven controversial and the trans military ban remains in effect – four lawsuits seeking to stop the ban are still being litigated in federal district courts – knowing that one of Austin's LGBTQ community members will be able to finish school is a win in our book. – B.S.

6) The Return of Austin's Dyke March: It was so good – and what a way to close out a decade! – we couldn't help but give it a "Best of Austin" award for its lofty, political, in-your-face goal of radically reclaiming space for dykes, queers, nonbinary folks, and the trans community. After almost 20 years (according to UT's LGBTQ Studies Program, the last Austin Dyke March took to the streets in 2002), it was a powerful reminder that there's so much left to fight for (not to mention defend), and a welcome, beautifully cathartic event to participate in. – S.M.

7) Austin Drag Queens Go National: 2019 will go down in history as the year that two local drag queens put Austin's drag scene on the map by securing top roles – and Top 4 status – on fan-obsessed reality TV shows. In June, Miss Kitty Litter ATX announced her acceptance to season 2 of Camp Wannakiki. Less than a month later, news broke that Louisianna Purchase – winner of the Chronicle's "Best of Austin" Best Drag Performer award for the past four years – was to be one of the performers vying for Drag Supermonster on The Boulet Brothers' Dragula season 3. Though neither took home the crown, both queens wowed audiences, achieved a cultlike following, and also dared to show the world just how fierce Austin's drag family really is. – S.M.

8) LGBTQ Wins at Austin ISD: After a yearlong push, activists were finally able to pressure the homophobic Celebration Church out of renting AISD facilities for services, in a victory for queer students. Earlier in the year, activists were not satisfied with AISD's decision to invest a portion of the rental proceeds from the church into the district's presence at Austin's Pride Parade, which the district said was the best they could do, because, legally, they could not deny the church access. So the pressure continued, and in August, church officials gave in and announced they would no longer rent any AISD facilities. It would've been easier for them to acknowledge that all LGBTQIA+ people deserve dignity and respect, but short of that, we're glad to see homophobes pushed out of public space. The second AISD victory could truly be transformative for the LGBTQIA+ youth of tomorrow: a revamped approach to teaching sex ed that instills in kids – from an early age – that people of all genders and sexual orientations deserve the same love and respect as everyone else. The battle for the curriculum (that'll go into effect for the 2020 school year) was hard-fought, taking three years to get to unanimous approval by the board of trustees on Nov. 1. – Austin Sanders 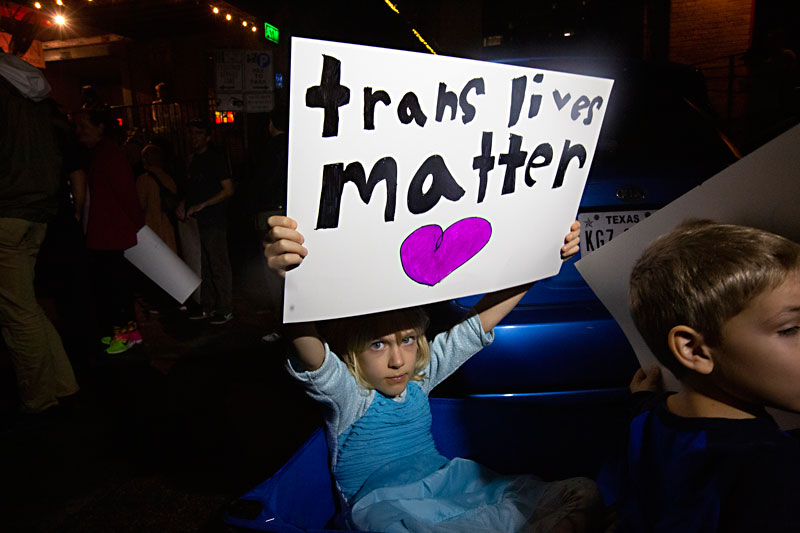 9) Austin City Council Proclaims Oct. 26 Intersex Awareness Day: This year marked an exciting move forward for the city in connecting to the larger intersex awareness movement by announcing October 26 as Intersex Awareness Day, thanks to the work of Human Rights Commissioner and activist Alicia Roth Weigel. Intersex folks face difficulties on multiple fronts, as Weigel points out how socially, physically, and politically people seek to remove intersex voices and experiences. With Austin's historic Intersex Awareness Day on the books, a firm middle finger declaring the eXYstence of intersex folks has been raised to those who might erase and dismiss their importance. – J.S.

10) Cheer Up Charlies Owners Take Over Rio Rita: Closing out the year on a highlight, Tamara Hoover and Maggie Lea announced their lease takeover of the Eastside staple. The pair, who are longtime fans of Rio Rita (from its original East Sixth roots), plan to keep the bar's name and the casual cocktail vibes, but expand the coffeehouse menu while "sprucing up" the joint, reported Rachel Rascoe. On its own, the news would've been welcome to Rio Rita and CUC fans alike, but combined with update that Lea had successfully wrapped her chemotherapy treatment for cancer that same week made it even sweeter. Over the summer, Lea shared that she was diagnosed with stage 2 breast cancer. We're certain we speak for the Qmmunity when we say congratulations on this latest venture. We can't wait to see what you do next! – S.M. 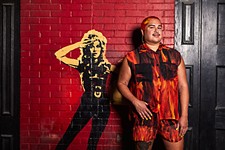 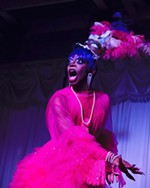