A stupid, irritating, or contemptible person 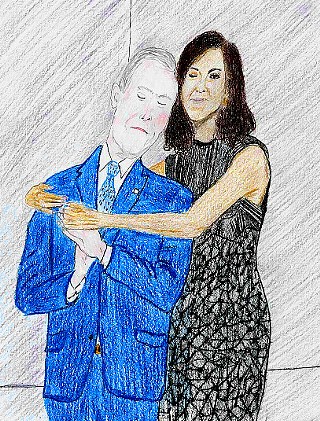 I am old. Romance at this age to younger people is as thrilling as thinking about the sex life of slugs. Absolutely no one wants to think about the slimy connections between any two, and everyone wants to avoid stumbling on a pair hooked up after a good rainstorm. For the record, I'm not quite ready to ride over Viagra Falls in a barrel myself just to see if I can survive. But despite that, I don't seem to know any better than to continue on with what I'm doing. I don't seem to know how to say this to you, but recently started dating a woman that claims to know you. Not just you, but the whole Hee Haw gang there at AC. Oddly enough she doesn't seem to keep up with your column, or what's in your paper, such as it is. At least she doesn't discuss it with me if she does. She does claim to use the political advice given by AC on which candidates to support, and she follows those recommendations to a fare-thee-well. I don't know exactly what to say about that to her. Shouldn't one cling to his or her own political bias? I mean in the end is your bias at AC, individually or collectively, any better or worse than any other individual's or group's bias? It puzzles me. I try to ignore what she says about it for the most part. I do that because I believe that it is usually not possible to reason someone out of something that he or she wasn't reasoned into in the first place.

She steadfastly despises President Trump, although she doesn't think about him as actually holding the office. But if Trump doesn't hold the office, why would you care about him then one way or the other? Which brings me to your column. Are you okay? In the past year or couple of years I could almost always count on having at least one good variant on the "I hate Trump" theme in your article. I would look forward to the way you would manage to sneak it in and then incorporate in your article as seamlessly as possible. But lately I haven't seen it as much. What's up? Are you planning on recycling your articles at some future date and don't want to have any current political references in there to have to try and edit out?

So my question is this: In these days of such intense political views, can romance transcend these deep divisions? It's odd that she can't seem to connect to anyone that doesn't share the depth of her dislike for (fill in the blank) Trump. I don't want to put too fine a point on it, but if someone was okay with a president still serving that, just prior to leaving office, actually voluntarily confessed in writing to committing two felonies while in office (to avoid being charged after leaving office), not to mention the use of a peculiar type of human cigar humidor while in the Oval Office, or being disbarred for five years, and paying out large financial settlements for sexual misconduct, maybe he or she could be a bit more circumspect about the current president? Anyway, I have no power to control or change any part of the situation with the current president. Is it rational for me to behave as if I do? I guess I could start lying about it to her, but I'm way too fat and lazy to get into it that much. What to do, Luv Doc? I'm teetering on the edge of hell and its flames are beginning to render me.

You should probably cut your girlfriend some slack. There is a huge difference between our current President Donald Trump, and the greatest living American president, Billy Jeff Clinton. The difference is this: Trump is an asshole. Yes, it really is that simple – just like our president. If you look up "asshole" in the dictionary, you may not (yet) find a picture of Donald Trump, but you will find an extraordinarily precise and accurate description of Donald Trump: "A stupid, irritating, or contemptible person." Sweet Jesus! Dimwit Donnie really hit the trifecta on that one, didn't he? He might not have been born smart, but no one could argue that he wasn't born lucky.

So, it seems like you're on the fence about verbally expressing your dislike for an asshole. Rather than being circumspect, you seem to be equivocating. Yes, Billy Jeff may have done some shady shit, but he wasn't an asshole. It's a very unsubtle difference. About the most assholish thing Billy Jeff did was play the saxophone while wearing Ray-Bans, and while that will undoubtedly earn him a special place in purgatory, it doesn't make him Trump.

George W. Bush is by all definitions an actual war criminal, but he's a goddamned likable war criminal. Somehow he manages to keep a busy schedule of shitty watercolor painting, funeral trance-dancing with Michelle Obama, and yukking it up with Ellen DeGeneres in Jerry Jones' luxury box at the Cowboys game, all while shouldering the responsibility for the deaths of hundreds of thousands of Iraqis and thousands of American military personnel. I seriously don't know how he does it. Maybe Dick Cheney has his conscience in a jar up in Wyoming.

By contrast, Donald Trump is pretty much Mother Teresa – not the Christopher Hitchens Mother Teresa. I mean the Catholic saint. OK, he hasn't actually earned sainthood – unless you can become a saint by doing a bunch of dickish, weaselly shit like trashing the environment, sucking up to despots (aka "birds of a feather") and, most recently, leaving the Kurds with their asses flapping in the breeze. Is he a genocidal war criminal? Not yet, but he is a huge asshole, which is why I think you should join your girlfriend in cheering on his impeachment until Congress finds the spine to get it done. Hopefully a set of watercolors is in his not-too-distant future.