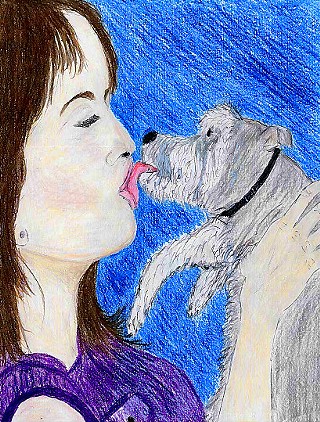 I have a 2-year-old schnauzer mix that I regularly give kisses to. My boyfriend says he doesn't want to kiss me anymore because he is afraid of getting dog herpes. Is that even a thing?

I mean ... unless you found your schnauzer in a dumpster behind a bowling alley, no, that's not a thing. And you know what? My apologies for portraying the bowling community as being particularly susceptible to dog herpes. You're equally susceptible to contracting dog herpes in a skating rink ... or a pool hall ... or a confessional booth at your local Catholic church – which is to say, it'll never happen. As dystopian as our current situation is, I am happy to report that you can't get dog herpes from a game of tonsil hockey with your pooch.

That said, a dog's mouth isn't exactly a hyper-sterile environment. Anyone who has seen their dog performing what could only be described as salutatory anilingus on another dog knows instinctively that hygiene isn't a high priority for canines. Dog saliva can carry parasites like hookworm, roundworm, and giardia, as well as bacteria like salmonella. Lots of dogs eat their own poop. No, it's not a fetish. Usually, it's an enzyme deficiency.

The good news is that you can tell your asshole boyfriend that the only herpes you can possibly give him is human herpes. I suppose there is a minuscule chance that your dog could give you human herpes. Of course, that means your dog would have very recently had to engage in greater or lesser acts of bestiality with someone who had an active herpes sore. I probably don't have to point out that if you see your dog engaging in an act of bestiality with someone who may or may not have herpes, don't fucking make out with him immediately afterward. This is exactly the kind of asinine, warning-label shit that no human should ever have to tell another, but ... well ... let's just say that people (and dogs) will occasionally disappoint you.

So, just to recap: Yes, there is such a thing as dog herpes. It's actually called CHV. No, you can't get it from making out with a dog – not even if it has active blisters – and sadly, it sounds like your boyfriend is using dog herpes as a lame-ass excuse to avoid foreplay. Shame, Boyfriend. Shame!