Imitation is also the most sincere form of ridicule

My cousin is stealing my wedding! Last June, my husband and I had a really beautiful wedding at a church in my hometown. Of course, all of my relatives were there, including my cousin, who seems to now be copying everything about my wedding. Same church, same reception hall, same caterer, same tuxes, same freaking color of bridesmaids' dresses! I am sure the wedding cake will be identical too! It's just so shameless. And, she has never even called me once to ask if I would mind. I always wanted my wedding to feel special; now it isn't feeling special at all. Am I being petty?

They say that imitation is the most sincere form of flattery. That's true, I guess, but it's also the most sincere form of ridicule. I mean ... if done right. For instance, I don't think Alec Baldwin is flattering Donald Trump on Saturday Night Live, but I think he is being really sincere in his ridicule. I guess President Hamberder should feel flattered that Alec feels almost as strongly about him as he does about his daughter when she turns her cell phone off. (Pssst ... Google it. Alec just loses his shit; but then we all have at some point, haven't we?)

All that said, I think a lot of this depends on the size of your hometown. If you're from Houston and your cousin is getting married at the same church, well, that's a little iffy, but if you're from Quail, Texas, there is only one Baptist church (back off, Catholics). For that matter, the closest tuxedo rental place is 90 miles away, and the caterer is definitely a blood relative. In fact, it's probably just one dude who does everything – and he probably has a pastor's certificate – just like Kirk on Gilmore Girls. It's a solid bet that motherfucker will be playing Pachelbel's Canon in D on the kazoo he keeps in his front pocket, just like he did at your wedding.

That has to be infuriating. No one should have to listen to Canon in D played on a kazoo. And no one should have their beautiful wedding memories stolen by an unimaginative cousin, but I am going to ask you to rise above. Why? Because this is one of those accept-the-things-you-cannot-change moments where you have to suck it up and find some Zen. At this point, your cousin already has major skin in the game. She's not getting a refund from Kirk, and short of finding out her fiancé wears Vibram FiveFingers or secretly voted Trump, that wedding isn't getting called off. So, be the bigger person, congratulate your cousin on her incredible taste, and enjoy the festivities from a new perspective! You done good, kid! 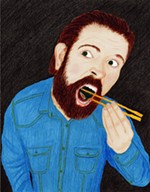