Luv Doc: She Talks Too Much 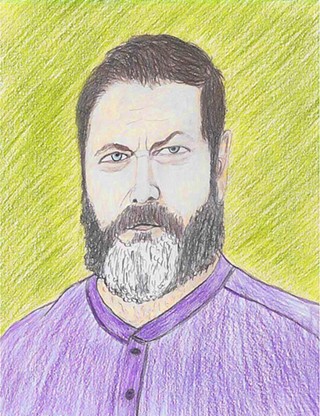 My girlfriend talks too much. At first, I thought it was cute, but we have been going out for several months and she just keeps chattering away. When I talk, I try to be direct and to the point, but with her everything is a long conversation. She spends hours talking about her day at work, and she works in an accounting firm where nothing happens. She talks through dates, and through movies, and concerts. She talked all the way through getting her first tattoo and she is always talking about her feelings. I still like her, but all this talk is getting annoying and I don't know what to do about it. Sometimes I just like to sit and enjoy the silence. How do I get her to quiet down?

Let me start by being direct and to the point: You are barking up the wrong tree, dog. I know you probably see yourself as some sort of surly, taciturn, Nick Offerman-style manly man who only speaks in monosyllabic grunts, drinks his whiskey neat, and orders his steaks bloody rare because worrying about the ravages of E. coli is for sissies. I mean, that's cute and whatnot, and it certainly makes for useful cinematic archetypes – guys like Rambo or John Wick or the outlaw Josey Wales; you know, those brooding, secretly violent types who are wonderful for advancing the plot but just fucking terrible at peaceful conflict resolution and diplomacy.

In the real world, however, those dudes are known as psychopaths. Show me a man of few words and I will show you either someone with a pitifully low IQ or someone whose brain is cracking at the seams with dangerously unchallenged neuroses and ridiculous harebrained notions. In my humble opinion, strong, silent types get an undue amount of credit. I'm sure you've heard the old adage, "Better to remain silent and be thought a fool than to speak and remove all doubt." I ain't with that. It's much better to speak and communicate your stupidity so someone can check your shit and you can learn from it. The world is far too full of dumbass sexists and racists and all manner of unhinged crazies who have never had their ridiculous notions challenged by a dialectic exchange. Conversation is how we flush stupidity into the open so we can kill it.

So maybe your girlfriend really is tedious and uninteresting. If that's the case and you're still with her, what does that make you? More importantly, if she truly does talk too much, why have you not tactfully communicated this to her? Perhaps she wouldn't prattle on so much if it weren't for your passivity. Would it kill you to actually engage in the conversation? To ask her questions? To truly try to understand what she's trying to communicate? Maybe you can slow her roll with some actual dialogue. Or, maybe you just don't think it's worth the effort. If not, chin up! There is probably a quiet, brooding, potentially psychopathic woman out there waiting for you.