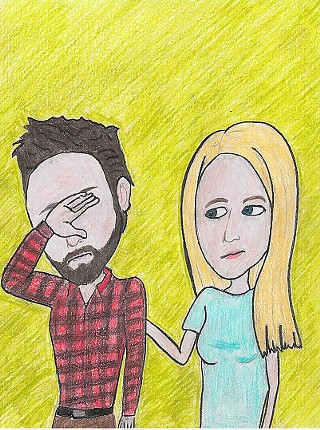 I am not trying to brag, I know I'm not the only woman who has this problem, but most men I meet end up hitting on me. I'm not unattractive, but it's not because of my looks. I've realized that it is because of my habit of making eye contact, engaging in polite conversation, laughing when something is funny, etc. Apparently, most everyone else goes so far out of their way to avoid contact with strangers – I walked across campus just now and at least 10 people nearly smacked into me because they were staring straight down at either their phones or their laceless Chucks – that many men are inclined to interpret the slightest acknowledgment of their presence as a real-life swipe right. I don't think I should have to change my behavior, but I am tired of having "I'm flattered, but I have a boyfriend" on auto-reply. Do you have advice that doesn't require me to join the disengaged masses?

This is probably not news to you, but people of both sexes are naturally attracted to polite, engaging people, looks notwithstanding. It's not a sex thing, it's a likability thing. It's a lack-of-neuroses thing. Someone with the confidence and humanity to truly connect with other people in a personal way without some sort of underlying agenda is a rare find.

Often, that underlying agenda is self-protection. People are so worried about how they will be perceived that they forget to be who they really are. It's hard to communicate effectively when you're trying to be someone else. It's hard to really connect and empathize with someone if you don't feel worthy of empathy yourself.

So it's not surprising that people are buried in their phones. Staring at a phone is much less intimidating to most people than actually striking up a conversation with someone. A cell phone is a ready-made excuse to not have an awkward conversation with a stranger, and as the saying goes, practice makes perfect. These days, people are really well-practiced at not emotionally connecting with other people – certainly not without the aid of a cute, bobbleheaded, acne-free emoji.

That's why what used to pass for normal, friendly human interaction is often confused these days for romantic interest. There are plenty of men – as you have noticed – who don't get much positive interaction with women at all, so even the smallest amount of interest/emotional connection seems like a come-on.

Here's the thing: Other people's reactions to your likability are not your responsibility. You don't owe it to them to make them feel better about their inappropriate/unwarranted advances or their misinterpretation of your motives. If you feel like you do, you might want to check in with yourself about your need to be liked by everyone. There is a difference between being likable and having a neurotic need to be liked. You're the only one who can make that call.

That said, I don't think you're going to be happy joining the disengaged masses. It doesn't sound like it's in you. You will have to deal with the penance of being a likable person, which is occasionally – or even frequently – telling people what you know they don't want to hear. Maybe you'll learn to do so gracefully, which is only going to make you more likable. Ugh. You just can't win, can you?