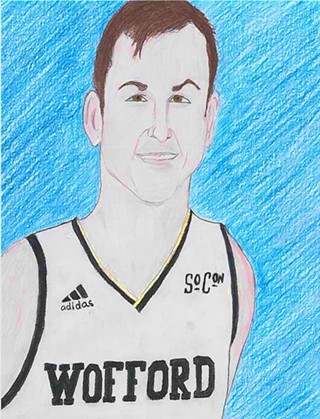 My husband and I have a real communication problem. He doesn't listen to anything I say. Literally. Not only about big things but little things, too. He will ask me if I have seen his car keys and I will tell him exactly where to look and then he finds them 10 minutes later exactly where I said they would be. I tell him about our son's soccer game and it's like I never told him at all. I set up a couples date with our friends and it's news to him on the night of. He even tries to tell me that I have never told him that he doesn't listen. I don't know what to do. It makes me want to scream.

I have to tell you, the problem may not be your husband. I just read your entire missive and can't remember a word you wrote. Maybe a re-read is in order. To be fair, I was filling out my NCAA bracket as I was reading it and there is a lot of trash talking about how Wofford could make a run because they have this shooting guard named Fletcher Magee who averages over 20 points per game and has a field goal percentage that is over 40%. I know, I know. What's that got to do with the price of tea in China?

Well, first of all, Wofford is not even in China, it's in Spartanburg, South Carolina, which rhymes with China, but that is where their similarities pretty much end. The ugly truth is that there is a really solid chance Wofford goes down to Seton Hall in round one and Fletcher Magee ends up working at Foot Locker ... or maybe as an alcoholic assistant high school coach like Dennis Hopper in Hoosiers – just proof that in life, you may miss 100% of the shots you don't take, but you still miss about 60% of the shots you do take – and that is the best-case scenario.

I might as well continue with the sports metaphors at this point, so let me just say it sounds like you're shooting well under average when it comes to making points with your husband. That's a really good sign that you need to quit taking the same low-percentage shots. You need to start making layups. Actually, you need to try to slam dunk whenever you get the opportunity: A) because slam dunks are high-percentage, and B) because slam dunks are fucking awesome.

Your husband clearly lacks presence and focus. These are the fundamentals of the communication jump shot, even if he doesn't think he needs them. That is where you need to start: Get it through his thick skull that you need his undivided attention. From now on when you talk to him – especially when imparting pertinent/useful information – make sure he is focused completely on you and what you're saying. Ask him to repeat it back to you if you have to. He might complain that you're treating him like a child or a senile old man. If he does, remind him that children and senile old men lose things and forget things. Whenever possible, make him write shit down – things like the date and time of your son's soccer game. Writing stuff down has been immensely useful to me – if only because it gives me a list of the things I will soon forget. But hey, it's a start, right? Before you walk onto the court, you have to lace up your shoes.