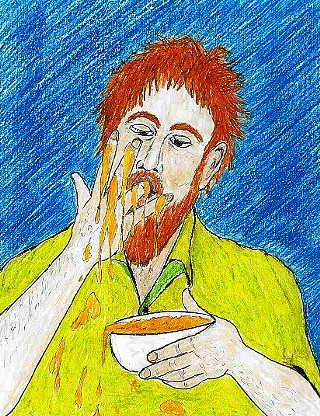 I have only been married to my husband for a few years, but our sex life is almost nonexistent. I have come to realize my husband is just gross. He has terrible hygiene. I don't know how I let it go before we got married... but I think he's worse now that we are married. I have to nag at him to cut his fingernails or use Q-tips on his dirty, waxy ears. Sometimes his morning breath is so bad I actually have to get out of bed so I don't retch. His below-the-waist hygiene isn't any better. A big part of the reason we don't have much sex anymore is because a few years ago I thought I would wake him up with a blow job on his birthday, and when I went under the covers and pulled down his underwear his crotch smelled so bad I wanted to vomit, so instead I slapped him on the ass and said, "Happy birthday!" He moaned and rolled over and I got up and took a shower. Since then, anytime we have sex I make him take a shower first, but really I am mostly too disgusted to have sex with him. I have talked to him about it and he says that all men are like this, but I have had boyfriends before him and I know that's not true. What do I do? How do I tell him he disgusts me without hurting his feelings? He is a great, fun husband otherwise, but this is really affecting our relationship.

First of all, you are a brave soldier – either that or this guy has an amazing personality. Even still, all the personality in the world will never overcome a funky crotch. Now, I know there are plenty of granola-munchers out there who would stridently argue that they are turned on by their partner's "natural musk." Good for them. I strongly believe those people should have their own private tropical isle far removed from modern civilization – someplace warm and humid where they can all marinate to their hearts' content in each other's dank, pungent, earthy aromas.

Generally, I trust what my nose tells me, and failing that, I trust what other peoples' noses tell me. I'm not saying I am immune to a certain amount of incredulity when someone is criticizing my hygiene, but generally, when someone makes an effort to comment on any part of my hygiene, I take heed. I believe that my right to smell like ass extends right up to where someone else's nose begins. People who are moralistic and self-righteous about their lack of hygiene have a name: They're called pariahs. They're easy to spot; a pariah is the guy alone in the corner at a party eating queso off his plate with his bare fingers. He's the one wondering why people are always finding quick excuses not to talk to him.

I mean, I get it, different people have different levels of hygiene. One person's putrid stench is someone else's "powerful musk." Some people bathe every other day. Some people only wash their hair once a week. Some people – I swear to God – have never even seen a toothbrush. If you're one of those people ... if you're someone who notices that people turn their heads to the side when you talk to them ... at the very least ... for the love of God ... pop in a breath mint every once in a while ... or maybe schedule a few hours of quality time with a dental hygienist.

Yes, there are levels of hygiene, but there is only one level of hygiene that is acceptable in a relationship, and that's the bare minimum your partner can tolerate. It's not what you can tolerate. It's a very simple formula: What can I do so the person I am making out with won't want to vomit in my face? There are always going to be hits and misses, good days and bad days, but there has to be an unmovable baseline, otherwise, your boyfriend gets vomit on his dick.

Therefore, you need to make a very clear and unambiguous list of what you consider to be an acceptable level of hygiene your boyfriend needs to achieve so that he might once again get to have sex with you – or for that matter, be in the same room with you. Be specific and comprehensive. Oftentimes people who don't clean themselves don't actually know how. There are resources. Provide them if you have to. Above all, make sure he knows this is the baseline, not the goal to be achieved. If he's not willing to put in the effort, you shouldn't have to put out.