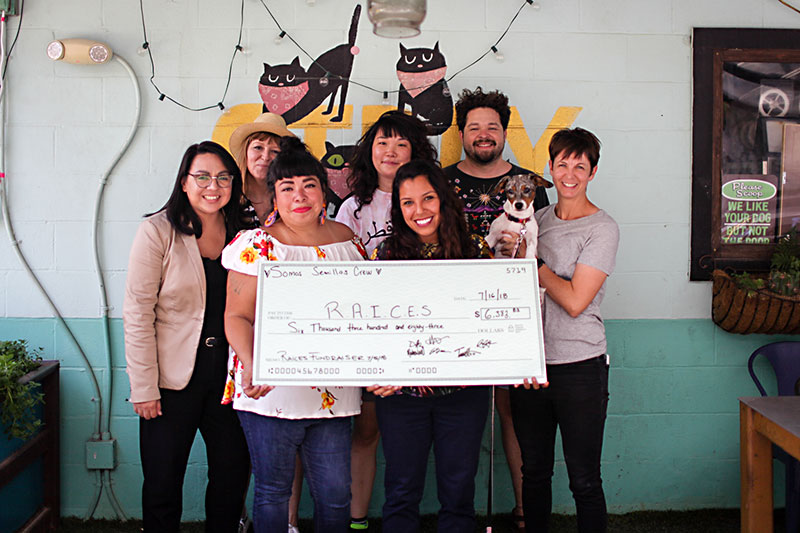 We keep getting higher (Photo by Anneke Paterson)

There's a Cornucopia of radical queer events this week. From tonight's Guerrilla Queer Bar to raise money for Texas Civil Rights Project's family reunification efforts and this weekend's inaugural Contrast Film Fest, to Sunday's Drag the Vote and next week's Fuego, one thing is clear: You can't keep this community down. Like Therese Patricia Okoumou, the protestor who made headlines for climbing the Statue of Liberty on July 4, reminded us: "When they go low, we go high." A living nightmare has passed since Michelle Obama said those words in July of 2016, but I believe we're taking them to heart. On Monday, "Gay Place" was invited to document Somos Semillas' check presentation to RAICES (also working to reunite families) at Cheer Up Charlies – the July 5 event raised over $6,300 and offered a spark of hope and proof of what we can do as a united front. As lead organizer TK Tunchez told me, "this effort was really supported and led by the QPOC and queer community." This is what "community support in action looks like." This, alongside Contrast's work to showcase artists who dare to push against boundaries and gender (see "Compare and Contrast"), reminded me of how much I believe in us.

Guerrilla Queer Bar: Summer of Resistance Take over the bar, hang out with some QTs, and raise money for the Texas Civil Rights Project. Qmmunity love and fromos for a cause. Thu., July 19, 6-10pm. Gabriela's Downtown, 900 E. Seventh.

Lesbians Who Tech + Allies: Christmas in July A winter-themed happy hour to break the heat and network with some of Austin's techiest. Thu., July 19, 6-9pm. Lala's, 2207 Justin. Free. www.lesbianswhotech.org.

Contrast Film Festival Look out, cinephiles and queer art connoisseurs, there's a new film fest in town brought to you by the same queers responsible for Homo Arigato and SXSW's Y'all or Nothing showcase. See the full lineup online. Fri.-Sun., July 20-22. www.contrastfilmfest.com.

Drag the Votes Planning Meeting A group of local queers are joining forces to get the LGBTQIA vote out this November! Sun., July 22, 10am-1pm. Spider House Patio Bar & Cafe, 2908 Fruth.