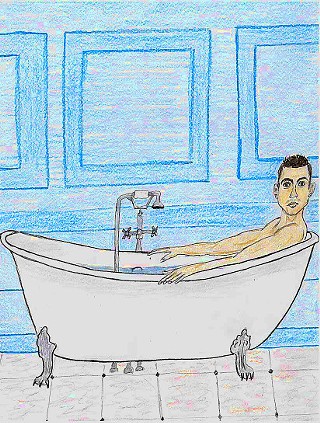 Wait, fuck that. No you don't. Anyone who doesn't know the difference between there, their, and they're doesn't deserve to be treated like they're some sort of savant when it comes to governmental policy. Fuck. That. Shit. Sorry red hat dunce cap, you need to bring something stronger than third grade grammar skills and pigheaded macho bravado in order to even hope to bust out of the Trump penalty box.

Similarly, you shouldn't have to fake an orgasm. I get it. Sometimes faking it is easier than enduring a crushed ego or a clumsy, hourlong tongue lashing, but in a long-term, ongoing relationship, you should set your sights higher than a sex life of quiet servitude. Here's why: While there are many benefits to intimacy, foremost among them is enjoying the simple honesty of being exactly who you are with no excuses – both mentally and physically.

Faking an orgasm is sort of like going to your happy place and finding an exercise bike. Ideally when you get to your happy place there is a large, clawfoot tub – filled with a giant hot fudge sundae. Something like that. Maybe substitute Cristiano Ronaldo. Whatever the case, you need to be absolutely comfortable in asking for what you want – even if what you want falls a bit outside what you perceive to be the norm. Yes, there are limits – and feel free to establish a safe word, but as long as both parties are in agreement and you're not doing permanent damage to yourself or others, you are good to go.

That means up to, including, and beyond the use of vibrators. Statistically, only about 25% of women are able to achieve orgasm through vaginal intercourse, so guess what? Even if you don't end up happily-ever-aftering with this guy, you will be doing him a favor by letting him know what's what. While it is true that men in general aren't exactly renowned for their ability to locate and properly stimulate the clitoris, I do believe that given patient guidance, there are plenty who are willing to try.