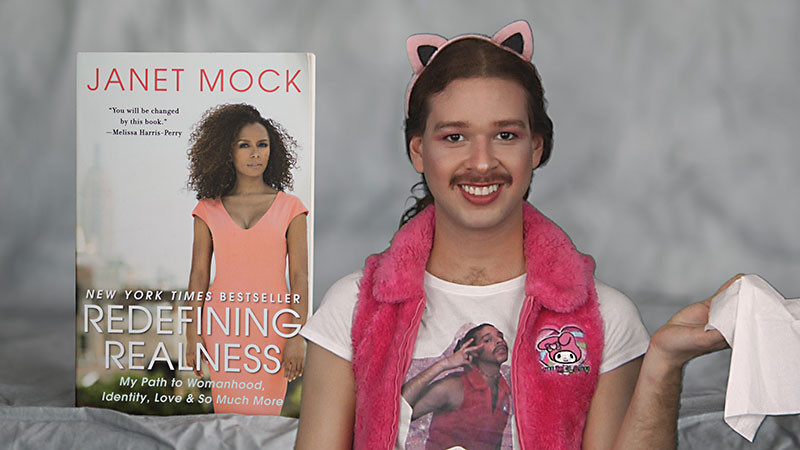 Why don't you read a book? (photo provided by Erica Nix)

Straight people ask the darndest things, which is basically the inspiration behind Erin Gentry, Erica Nix, and Jess Gardner's latest collaboration. Know What Queers Know is an "unapologetically queer and feminist" short film that encourages folks to educate themselves. Gentry tells "Gay Place" she and Nix came up with the idea (for a recent MASS Gallery show) after Gentry confronted a co-worker on their heterosexism who then asked for a book recommendation to learn more about genderqueer people. Gentry says: "I was like, 'How can I pick just one!'" This interaction blossomed into a Reading Rainbow-inspired project encouraging folks to read about queer, trans, and feminist cultures. Doing so, Gentry argues, grows empathy and understanding. The film features a star-studded cast of qmmunity members including Rebecca Havemeyer, p1nkstar, Gretchen Phillips, and more. The project was shot, in part, at BookWoman, Austin's very own feminist bookstore. Now it's returning for a special screening Friday night. You'll laugh, you'll cry, and you just might walk out with a few new book recos! And Gentry's adamant: "It's not just for queer people." We certainly hope not.

Fuego ATX It's back and hotter than ever! Regal People and Chorizo Funk will make you move whilst you're buying wares from the QTPOC artisan market. Thu., June 28, 9pm-2am. The Sahara Lounge, 1413 Webberville Rd. $5.

Die Felicia! The scream queens of your dreams return with their hell hound helpers and guest Nekrofilia. 18 and up. Sat., June 30, 10pm. Elysium, 705 Red River. $6.

Creative Journaling for Mental Health Bring your journals, planners, notepads, iPads – whatever – and getcher self to this journaling session with allgo. Tue., July 3, 6:30-8:30pm. allgo, 701 Tillery Ste. A-1. Free. www.allgo.org.

RAICES Fundraiser: Somos Semillas Help raise funds for children torn from their families at the border. Soundtrack for the evening provided by DJs Mahealani and Chorizo Funk, with Mama Duke, Finessa, and the Tiarra Girls. 100% of profits will be donated and CUC is matching donations up to $1,000. Thu., July 5, 9pm. Cheer Up Charlies, 900 Red River. $10 suggested donation. www.raicestexas.org.