Coping, carrying on, and saying farewell 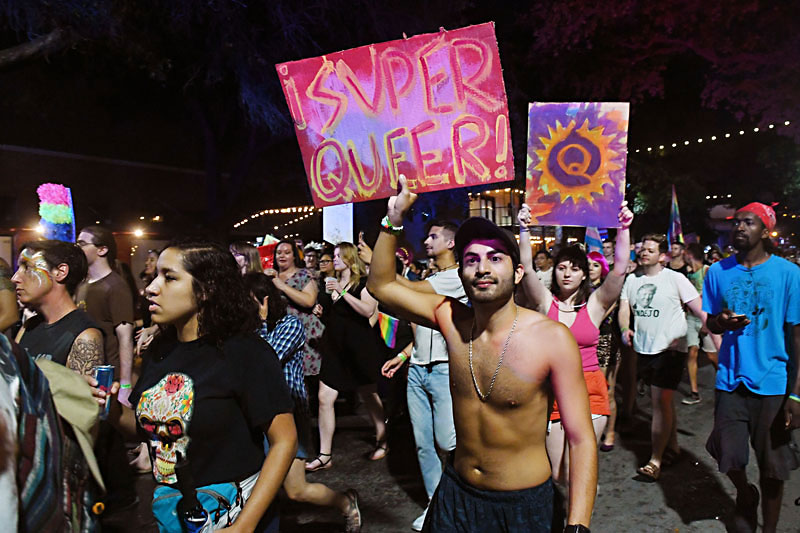 Queerbomb will march on. (Photo by John Anderson)

There's no point in dancing around it – Austin's had one helluva week. The city has been perpetually shook up by explosions and the devastating loss of residents Anthony House and Draylen Mason. There aren't enough words here, so I'll leave the rest of that talk to our News team (see "What Made Him Do It?" March 23). Perhaps, too, some of y'all have noticed Queerbomb has once again come under fire for old accusations of misused money and cliquish organizing. The recent email attack, launched last Thursday in the midst of SXSW, was allegedly sent by a former QB member – who joined the new cast in January 2017. Shortly after, he was voted off the island for "confrontational" behavior and an "unwillingness to work cooperatively with the group," Queerbomb said Friday. Volunteer organizer Brian Zabcik elaborated, noting these are “old accusations” that have “been examined and found to be false and baseless.” For more, see “Queerbomb 2017” (June 2, 2017). Now let's move on. Next Thursday marks the (final) return of HavenCon. This year's theme is A Cosmic Journey and we're sure it'll be a heartfelt, out-of-this-world farewell to Austin's geek and gaymer convention. We're sad to see it go, but happy to have one last chance to partake!

All-Women’s Two-Stepping Lessons! Whether you follow or lead, this class will teach you the right moves. All self-identifying women welcome. Thu., March 22, 7-8pm. The White Horse, 500 Comal.

The L Word Trivia – Season 3 Kick off trivia with a queer social hour. Games begin at 7pm. Questions could include: What did Bette ever see in Tina? And more. Sun., March 25, 6-9pm. Hops & Grain Brewery, 507 Calles. $6. www.fayefearless.com.

QueerBomb Planning Meeting Got some thoughts to share with or about Queerbomb? Here's your time. Wanna volunteer to do more? Sign on the dotted line. Mon., March 26, 7-9pm. The Q Austin, 2906 Medical Arts.

Born This Gay: Lady Gaga Birthday Ball She's given us a million reasons to celebrate her. So join DJ GirlFriend for a night of Gaga beats and back-up tracks from other pop divas. Wed., March 28, 10pm-2am. Volstead Lounge, 1500 E. Sixth.

HavenCon 4: A Cosmic Journey Texas' first and only queer, geek, and gaymer convention returns for its final year, and they're going out with a bang! Four days (or one, if you choose) of epic nerdiness, cosplay, drag, and loads more. This year, celebrity guests include Tracee Cocco (Star Trek) and Daniel Newman (The Walking Dead). March 29-April 1. DoubleTree Hotel, 6505 N. I-35. $15-200. www.havencontx.com.