Are you ready for round two? SXSW is still going strong – hell, music is just getting warmed up. With so much going on day and night, this week we're gonna let the listings mostly speak for themselves. But, special shout out to the one-year anniversary of Frida Fridays, celebrating on Saturday with great music and good shopping. And, in case you've missed us waxing poetically about Lesbian Wedding's annual SX send-off, we really can't reco it enough y'all. It's chill, it's queer, it's cheap, and there's always an epic dance party. Plus – just look at the lineup of performers! We also recommend easing your SXSW withdrawals with this month's Fuego – a party for and by Austin's QTPOC communities (all are welcome, just be cool), now at Cheer Up's and taking place next Thursday. Good beats, good people. Keep on dancing, dolls.

Rock Your Package VI Bands such as Pleasure Venom will be rocking out in their chones. Wed., March 14, 2-8pm. Package Menswear, 1114 W. Fifth. www.packagemenswear.com.

Fade: A Queer Meet Up Her Philly Moves – a Philly-based collective for LGBTQ women – is headed to SXSW for a queer pop-up kinda hang out with performances by THEakasha, Zhé Aqueen, and Honey Child. Free drinks, chill vibes. Wed., March 14, 3-5pm. RSVP for location.

Next Level Trash A brilliant night of dark, sensual rhythms curated by Nymble Digitz and Daniel Allen. Call it a sensory overload you won't want to miss. RSVP on the Face for location. Sat., March 17, 10pm. RSVP for location. $15-20. 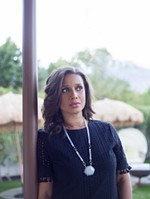