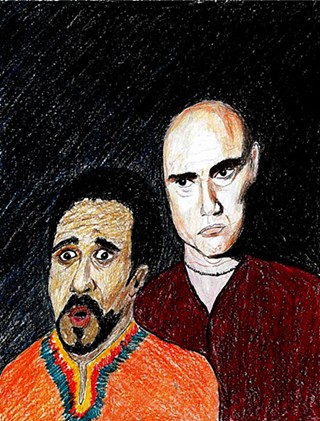 A woman named Grace Gizenga who is formerly from the Democratic Republic of Congo recently emailed me for assistance with a business venture she intends to establish in the U.S. Apparently she has access to $35 million, which her late husband deposited in a private security company shortly before he was assassinated. She has very generously offered me 40% of her husband's money if I agree to assist her. I did the math and that's $1.4 million. Only problem is, I'm not so sure this lady is on the up and up. Seems kind of fishy to me. Why would she ask a total stranger to help her get her money back?

Well, Tempted, I'm a fake doctor, not a fake mathematician, but I took the liberty of having Alexa, my smokin' hot executive assistant, crunch the numbers on this deal and I have some wonderful news: 40% of $35 million is not, in fact, $1.4 million; it's $14 million! For that insane amount of cheese you should definitely throw caution to the wind and Uber your ass up the Congo to see what's shaking.

Quick piece of advice though: If you run into a fat white guy taking a sponge bath and dictating T.S. Eliot into a tape recorder, tell the Uber driver to punch it. A water buffalo is about to get hacked to death by a bunch of shirtless guys with machetes, and the fat guy? He will fuck anything up to and including a mailbox ... and/or Richard Pryor. Either way, you need to get out of there before he decides to introduce you to the business end of "Mudbone." In truth, some consensual sodomy with an A-lister is probably the best scenario you could hope for in that situation. You're more likely to end up a skull on the end of a stick. No, that isn't a euphemism.

What I am saying is that the heart of Africa is a hard place to scrape together $14 million – certainly without the military assistance of a cash-rich but resource-starved Western European monarchy. You go in there and try to cowboy this deal and things will go very badly. Colonel Kurtz didn't just paddle up the river and start swinging his dick around and quoting apocalyptic poetry. No, a colonel generally commands about four-to-six-thousand men, so you can bet that by the time it came to killing the colonel, the natives were more likely just plumb tuckered out. Carnage on that scale is a huge logistical problem. They probably just said, "Look Colonel, we'll worship you as a god as long as you help us clean up all these corpses."

Now, I am not saying that you're going to encounter the same type of privations encountered by Colonel Kurtz, or Marlow, or even Francis Ford Coppola for that matter, but I am saying that any widow of an assassinated African millionaire who is spamming Americans to help her loot her husband's security deposits should be treated with a certain amount of skepticism. So, before you cash in all your skymiles for a plane ticket to Kinshasa, you might want to Google Grace and see if she's on the up and up. Maybe have her send you a bathroom mirror selfie or at least have her follow you on Twitter. Otherwise, it's $14 million, right? So you might as well jump in with both feet.