What doesn't take two thumbs, both eyes, and the lives of innocents? 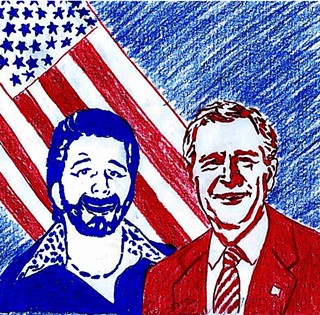 I have a friend who calls me occasionally – more than I would like her to – and here's why: I can't get her off the phone! Or rather, I can't end a conversation with her. I try, but she doesn't seem to be able to pick up normal vocal cues or inflections that most people do.

Her: Still droning on.

It is like talking to a very uninteresting robot with bad hearing. I always get caught in one of her endless monologues about her son's behavior problems or her mother-in-law's bitchiness and I want to scream. Instead, I make up some lie like, "Oh, the pizza I ordered is here. I REALLY have to go." I never order pizza, and I feel bad about lying to her, but I feel like it's the only thing I can do. Is there a more polite way to get off the phone without lying?

First of all, who even has phone conversations anymore, outside of people in nursing homes? These days, everyone texts. The most frequent text I get is "W," which I am pretty sure is a not-so-thinly veiled allusion to the fact that I bear a mild resemblance to our 43rd president. The second most frequent text I get is "K," which, as far as I can tell is text lingo for, "Great texting with you! Let's text later!" because it always precedes a long cessation of texts with that person. I occasionally get an "LOL." Those are especially satisfying because it's really hard to tell on an actual phone call if the person who is laughing out loud is doing it sincerely.

Everybody loves texting! Right? Why have a two-minute phone conversation when you could communicate the same information with an hour or two worth of texting? And I'm not talking about some arthritic, geriatric texter. I'm talking about one of those "blazing thumbs" millennials who thinks the mic on their smartphone is only for doing Snapchat. Hey Rob, sup? Not much, S'up with you? Not much. Just chilling. Word. Word. Hey, do you know that girl Denise? Denise who? You know, the Denise that works at … (screech … thud thud thud thud thud). The preceding is the kind of inane prattle cops find on the cell phones of people who plow into pods of preschoolers while texting in their SUVs. You know what doesn't take two thumbs, both eyes, and the lives of innocents?? A phone conversation.

Phone conversations do, however, demand tact and diplomacy, skills that are rapidly on the decline in the digital age. Let's get down to brass tacks: Most people are boring AF – especially on the phone. That's why, unless you're talking to Jesus, Dave Chappelle, the Publishers Clearing House prize committee, or a suicidal bridge jumper, you should limit your phone conversations to a couple of minutes at most – no longer than a Navy shower. Next time you answer the phone, just say, "Hey, I only have a few minutes to talk, so don't be upset if I have to hang up on you!" That will of course be a lie. But sometimes being brutally honest means losing a friend. Would you rather have no friends or a clean conscience?