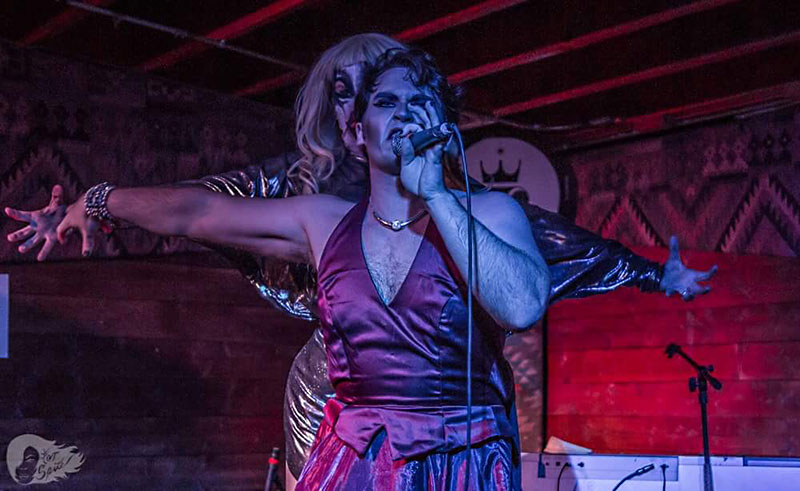 A new October residency is creeping and crawling all over Cheer Up Charlies. Caleb De Casper, Austin's piano-playing singer/songwriter/performer, will host horror cabaret every Sunday, complete with costumes, local performers (such as Gretchen Phillips and Total Unicorn), and he might also eat your heart out – literally. He tells the Gay Place he's been labeled "shock rock" because "I sometimes eat raw hearts onstage or pull my face off at the end of the performance, revealing a horror underneath." He adds, "I also frequently bleed during my sets." But to Casper it's not shock, it's performance art. All of which he does in high heels and backwards … or was that Ginger Rogers? Either way, Casper enjoys the frills and fishnets of gender-f*cking while onstage adorned with "horror glam" makeup – a custom that began with his music career in North Carolina. Of the only state that's successfully passed a bathroom bill, Casper says: "There's a real hatred for people who deviate from gender norms – there, the punkest thing that you can do is to be a boy singing songs about boys while wearing fishnets and evening gowns." Even in Austin, Casper's work promises something new and unrestrained. What better time to embrace the queer macabre than Halloween?

Switch Night With Vegas Van Cartier Who doesn't love a good switch? Vegas leads her cast in a game of "I play you, you play me." Sat., Oct. 7, 11pm. Sellers Underground, 213 W. Fourth.

Drag Class Sabel Scities is taking you back to class and schoolin' you on drag. This is a no-elimination class and every team competes for the full 10 weeks. See the Face for details and registration. Tuesdays, 8:30pm. Rain on 4th, 217 W. Fourth.

Drag Me to Hell A night of spooky haunts and sexy surprises with these drag kings. Come dressed in yer best costume for a chance to win free show tickets and prizes. Tue., Oct. 10, 9pm. Elysium, 705 Red River. $5-10. www.fb.com/boizofaustin.