The Luv Doc: A Carp in a Sand Trap

There's nothing much sadder than a stripper in a golf cart 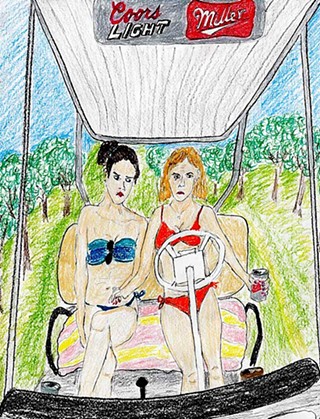 My husband's best friend is getting married in October and he is the best man, so he is planning the bachelor party. My husband was planning a golf tournament and then a bar crawl, but several of his friends are insisting that he should hire strippers or go to a strip club. I am not comfortable with that, and I am sure the bride wouldn't be either, but my husband says he doesn't want to spoil the bachelor party for everybody else. Do you think he is lying to me or just feeling pressured?

– I Side With the Bride

Let's start with golf. Yes, I know golf is a sport. It's on ESPN2. However, the golf you see being played on ESPN2 differs vastly from the amateur golf the rest of the world plays. That golf looks more like a bass fishing tournament, but with much uglier clothing. By the way, somehow, bass fishing is also a sport, which would theoretically make wheat farming a sport. Curiously, wheat farming is not on ESPN2 even though it is every bit as exciting an activity as bass fishing and golf.

The difference with wheat farming is that, generally, nobody drinks a case of Miller Lite while driving a combine – not unless they're looking to get an ass-whuppin' from some ropey, leather skinned, Marlboro Man-looking motherfucker. Golf carts and bass boats, on the other hand, are rarely driven by sober people. When they are driven by sober people, those sober people are highly annoyed off-duty strippers supplementing their incomes selling beer or hawking fishing lures. So you see, the idea of hiring strippers for a golf tournament is hardly an original one.

However, just because it's unoriginal doesn't make it right. Truly, there's nothing much sadder than a stripper in a golf cart. It's a cruel, fish-out-of-water situation – like a carp in a sand trap. How did it get there? Who is responsible? Do I give it money? Strippers should be seen in their natural environment where the lighting is friendly and the clientele is generous.

I am in no way suggesting your husband cave. Personally, the whole conceit of a strip club rubs me wrong. I don't want to shop for vegetables if I am not going to eat them. I know, however, that there are plenty of guys in the world who would love nothing better than a lap dance from a nicely shaped eggplant. Nonetheless, I say fuck those pervy bastards. They can do that shit on their own time. Your husband should ask the groom what he wants to do and then make it happen within the limits of his own conscience. That's what you would want him to do, right?