Go Forth. Be Memorable. 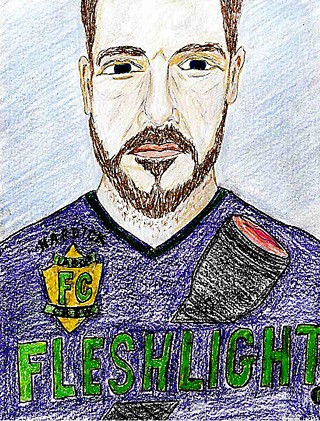 I'm a 43-year-old single, gay man. I've always had lots of friends in the past, but now everyone is getting older and married or becoming parents. That's great and all; I know everyone grows up. Thing is, I can't make any more friends! Especially gay ones. I frequent gay bars and play in a gay sports league, but I'll be damned if anyone knows my name even after a year. I still enjoy attending because I like getting out of the house. Friends were a small goal that I hoped would lead to something more, but if nobody even cares to learn my name, what am I to do?

I feel ya, John. This whole TEAM/me bullshit has gone too far. Either that or America has become a nation of cheap bastards. Nobody wants to pay to put names on the backs of jerseys anymore. I don't know about you, but if I hit a grand slam, I want the announcer to scream my name so loudly into the PA system that blood trickles out of everyone's ears.

I get it. I understand that the goals of the team supersede the lust for personal glory, but goddamn, maybe we also need to recognize the fact that some people on the team spend a lot more time in the batting cage. For just a few dollars more, why not give people the personal recognition they so richly deserve?

I have been trying to get Fleshlight to sponsor my adult soccer team for several years now, and you know what I hear on the other end of the line? Crickets. Now, I will freely admit we are the last-place team in the lowest division of the league with exactly 0.0 wins halfway through the season, but with names like "Hardick" and "Lube" on our roster, we are pretty much a slam dunk for Fleshlight sponsorship. Nonetheless, it's kind of ironic that a multimillion-dollar company that makes portable glory holes disguised as illumination devices doesn't want to promote my personal glory. Well, at least that's one way to look at it.

That said, I have been to enough gay bars to know that there aren't a lot of dudes walking around with their last names emblazoned on their shirts – either that, or there are a lot of gay guys named Versace. That's fine, Versace is a pretty dope fucking name. His soccer team probably even has a Fleshlight sponsorship.

It's totally understandable that guys in your sports league don't remember your name. There are dudes I have been playing pick-up basketball with for decades and I am not entirely sure I know their names. There's that chubby guy who is money from the three and that redheaded dude with mad springs and that blond guy who calls imaginary fouls. They probably have names and interesting lives and families and careers, but fuck that, I just need them to get me the rock.

Here's the deal, Doh: If you want friends, they're going to cost you. If you want friends you can also fuck, they're going to cost you even more. It's not enough just to show up. You have to interact. You have to engage. In the immortal words of Maya Angelou, "People will forget what you said, people will forget what you did, but people will never forget how you made them feel." Go forth. Be memorable.