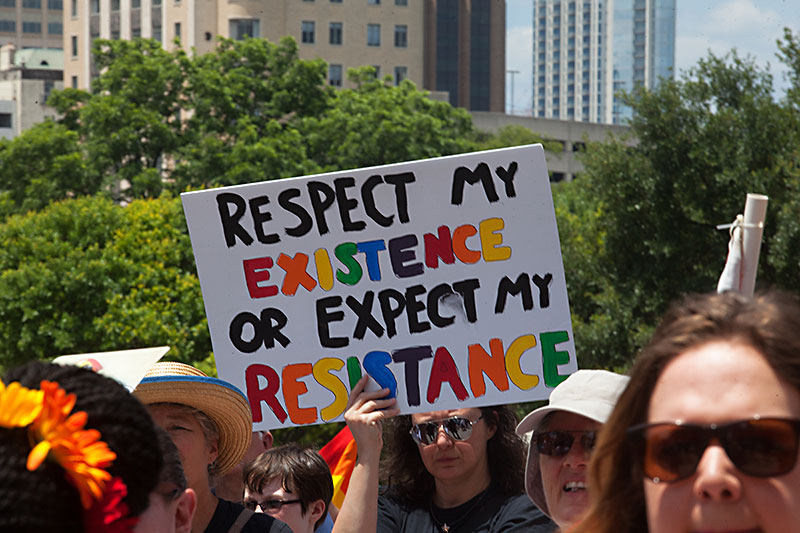 They say it's the Summer of Resistance … (Photo by Jana Birchum)

Last Thursday, June 15, Gov. Greg Abbott signed House Bill 3859 into law – meaning that on Sept. 1, it will be legal for child welfare providers to deny foster and/or adoption rights to LGBTQ/Jewish/Muslim/atheists/single people, etc. due to "sincerely held religious beliefs." HB 3859 will also allow these providers to refuse abortion access to pregnant youth in the foster care system, and allow queer and trans kids to be sent to conversion therapy or denied hormone treatment. According to DeAnne Cuellar, Equality Texas' communications coordinator, "multiple organizations" think the discriminatory law will be challenged in court, but Cuellar could not name any of said organizations working on filing a lawsuit at the time of publication. "Lawmakers used religion as a weapon to pass a bill that not only harms qualified candidates who want to start families, but children," said Sarah Kate Ellis, GLAAD's president and CEO. "This law was never about the best interests of Texans or of children, but about forwarding a political agenda to codify the permission to discriminate against LGBTQ Texans into state law."

In other queer news, Austin's first-ever LGBTQ Start-up Weekend kicks off today, and on Saturday Elysium hosts a fundraiser for drag queen Christi Foxx Paris, who's got medical bills piling up after being raped and beaten last month.

Poo Poo Platter Presents GAG: Cult Films! Ten remaining gals give what they've got for a chance to compete in the July finale! Winner heads to Bushwig, N.Y., with the platter princesses. 18 and up to party. Fri., June 23, 10pm. Elysium, 705 Red River. $5.

GayTripper: The 2017 Big Gay River Float Float the river with yer fave gays. Yes – this is the one that was rescheduled a month ago. See website for details. Sun., June 25, noon-5pm. San Marcos River. $30-60. www.therepubliq.com.

Austin PRIDE 2017 Easy, breezy, beautiful, Austin Pride. Embrace that August heat with the fest (at Fiesta Gardens) then catch the parade as it makes its way down Congress Avenue to Fourth Street. Sat., Aug. 26; festival at 11am, parade at 7pm. Various locations; see website. Free to $20. www.austinpride.org.

Splash Days Give in to that Texas heat with a splash. A dude-filled weekend that supports the LGBTQ community. This year the boyz are raising cash for ASA, Kind Clinic, and Care Communities. Fri., Sept. 1-Mon., Sept. 4. Various locations. $15-160. www.splashdays.com. 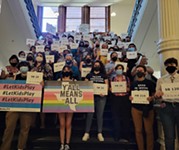 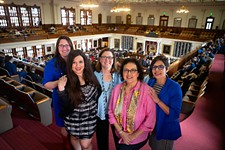