The Luv Doc: The Trouble With Trouble

My girlfriend goes out drinking with her friends in the service industry on a regular basis. I don't mind that she does this because she isn't terribly obnoxious and she never drinks and drives. She always takes a rideshare or has a sober friend take her home. But, when she gets home, she starts posting on social media, and sometimes her posts can be extra acerbic and confrontational – not just about politics, but about nearly anything: Bands, food at local restaurants, the hygiene habits of customers, etc. I have tried to talk with her about toning it down and maybe not posting while she's drunk, but her response is always "If people don't like it, screw them." I am afraid that at some point, she is going to end up losing a friend or getting fired from her job, even though she doesn't seem too worried about that herself. I have read that you shouldn't post on social media when you're drunk. What do you think?

My sixth-grade football coach's favorite saying (or at least so it seemed) was, "Excuses are like buttholes. Everybody's got one and they all stink." I think he used the term "butthole" because he thought it less crass than "asshole." Regardless, I remember having serious doubts about the breadth of his olfactory experience with buttholes. For instance: How many buttholes does one have to sniff to determine unequivocally that they all stink?

I would think that to arrive at such a confident conclusion, you would have to get a solid whiff of several hundred million, at least. The world population currently stands at 7.5 billion people, and I think we can safely say that pretty much all of them have buttholes. Either that, or there are some fetish sites that have escaped Google's tentacles. Now, even if you lined up 200 million buttholes end-to-end and sniffed one butthole every six seconds for six solid years, you would still have another four months of serious butt sniffing … just to get a decent control group. That seems impossible. And besides, what kind of monster would even attempt that?

Conversely, let's say my coach had only sniffed a few hundred at best. Given the total number of buttholes in the world, that figure seems comically low. Statistically insignificant. Like the sum total of humanity itself in a larger existential sense. To his credit, my coach never let insurmountable facts get in the way of his deeply entrenched belief system. It could even be argued that it was exactly that idiotically unfailing optimism that led us to a winning record with what could only be described as a stone soup of athletic mediocrity.

Now, back to your drunk-posting girlfriend. To paraphrase my coach, opinions are like assholes. Everybody's got one, but we don't need to smell them all to know that most of them stink. Even if your girlfriend's opinions are airtight and squeaky clean, they're going to get her in trouble if she shows them in public too much. Of course, that brings to mind another old saying, "The trouble with trouble is that it always starts out as fun." Do you want to be the boyfriend that lets her have her fun, or the wet blanket worrywart? 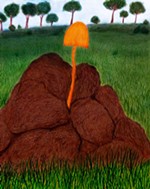 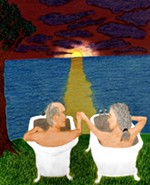