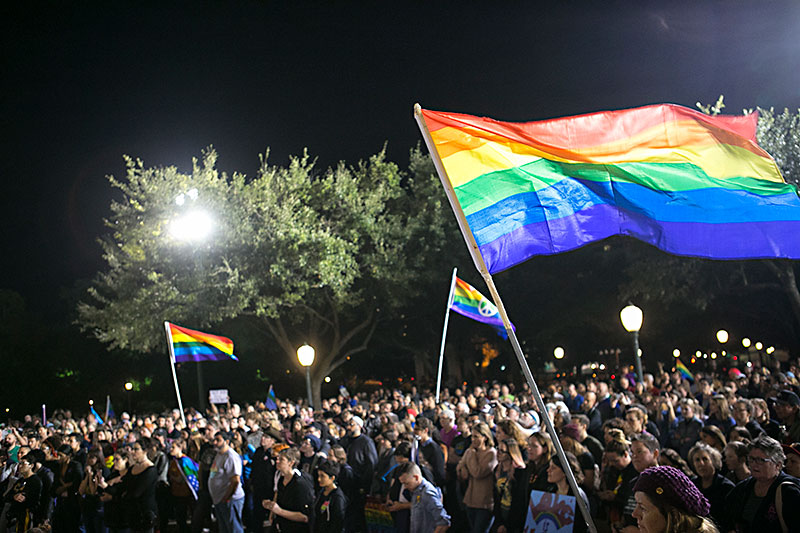 Pride began as a riot. (Photo by Jana Birchum)

2017 will go down in history for many things. The year we took a step backward in time, in rights, in equality. For me, I think it'll also be remembered for its protests – the year millennials took to the streets en masse demanding equal rights for women, for queer and trans folks, for immigrants, for black people, Latinx, and Muslims. Sunday – in honor of Pride Month and the day before the first anniversary of the Pulse nightclub massacre – queers across the country will march against bathroom bills, religious liberty laws, for the right to adopt, foster, pee, and marry. For protection in our jobs and housing. The Texas Equality March for Unity and Pride is one of many sister marches to D.C.'s National Equality March. Organized by Queer Rights ATX, a group of queer and trans Texas activists, Sunday's protest will include speakers Fatima Mann from Counter Balance ATX, former Houston Mayor Annise Parker, and activist Ray Hill who's known for many things including his work with Harvey Milk. At a time when rights are being stripped away, let's return to our roots. After all, the first Pride was a protest.

Hail Yasss! PB & JJ: A Drag Tribute to Pat Benatar & Joan Jett If you too love rock & roll then put another dime in Poo Poo Platter's jukebox cuz they're about to hit ya with their best shot. 18 and up welcome. Fri., June 9, 10pm. Elysium, 705 Red River. $5. www.fb.com/poopooatx.

TGQ Social A get together for everyone on the trans spectrum, lovers, and allies. Rain or shine, hot or cold. Shy? Get there early; extroverts arrive at 6pm. Second Sundays, 5:30-9pm. Butterfly Bar at the Vortex, 2307 Manor Rd. Free. www.fb.com/tgqsocial.

Austin Black Pride Boat Party 2017 Get on the boat with ABP! BYOB, food (for sale), and swimmers (and floaties) encouraged. Before boarding, donate some school supplies to the drive. Deets on FB. Sat., July 15, 6:30-11pm. Just for Fun: Watercraft Rental, 5973 Hiline. $22-50. www.fb.com/austinblackpride.