The Luv Doc: Too F%#ing Flirty

People are born grifters, swindlers, and loafers and are therefore deserving of our contempt 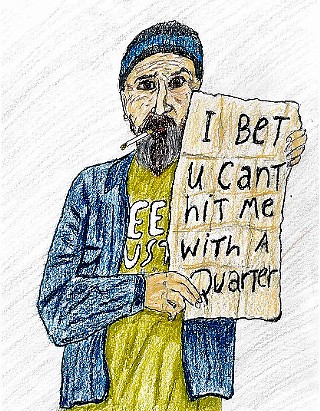 My girlfriend is too fucking flirty and it is driving me crazy. We have been dating for nearly a year, but she still constantly flirts with other guys – her co-workers, my friends, random strangers in bars. I try not to be jealous, but I can tell when guys think they have a chance with her and it sometimes goes too far. I have complained about it but she says it's harmless and that she just likes the attention. I don't think she would cheat on me, but it still makes me jealous and I hate it. How do I get her to stop flirting?

Easy. Just call it something besides "flirting." Bob's your uncle. If you are going to call it flirting every time your girlfriend giggles or touches her hair or bats her eyelashes or drops it low and bounces it for some random dude you are going to wind up in the loony bin. Actually, full disclosure: Ronald Reagan effectively gutted funding for mental health treatment facilities 30 years ago, so rather than winding up in the relatively nurturing and posh environment of a state mental health institution, you will more than likely wind up on a street corner in a pair of pee-soaked khakis, yelling obscenities at passing traffic and holding a weathered cardboard sign that says, "Bet you can't hit me with a quarter."

I don't have to tell you that standing on a hot street corner with quarters whizzing past your head isn't a good way to improve your mental health. Reagan didn't know that because he was simple – just like our current president but in a much less petulant and spiteful way. He and a lot of other simpletons decided that instead of paying for the treatment of mental illness, we could be entertained and scandalized by it. They also decided they were tired of paying to educate other people's children, so now, instead of having a reasonably informed citizenry who can effectively participate in the political process, we have a nation of simpletons who are unable to recognize a megalomaniacal psychopath when they see one. We are all scandalized and … let's be honest … a little bit entertained as well. Whoopsy! All of this happened on our watch, of course. I think we might have been experimenting with ecstasy or LARPing or something.

Point is, as a society we have pretty much given up on the naive notion that we have the capacity to change other people's behavior and have instead decided to run with the idea that people are born grifters, swindlers, and loafers and are therefore deserving of our contempt. It greatly pains me to throw your girlfriend into that dustbin of derelicts, but by your description, she sounds human, and therefore should not be trusted. So, if you can't change her behavior, you can at least mod your own. Quick cautionary: It may not work. She might continue to keep "flirting," but that might just mean that you really didn't change your mind. Regardless, whining about her flirting is a no-win situation, so either get over it or move on.