Pot, like most drugs, is pretty fucking wonderful when used recreationally 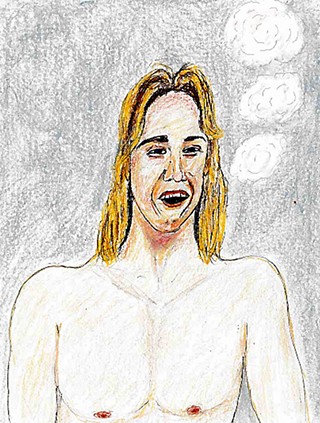 I recently found out I am pregnant – six weeks – and I haven't yet told my boyfriend that he's the father. The reason why is that he is a heavy pot smoker and has been the whole time I have known him. It's never really been too much of a problem until now, but knowing we might be sharing parenting responsibilities is a sobering thought. He doesn't pull his weight now, and I have no reason to believe he would if we have a baby. I think he would tell me he is going to get his act together and then not follow through. I don't mind the idea of caring for one child, but I don't want to care for two. Should I tell him it's his, or claim the postman rang twice?

I don't know what your postman looks like Preggo, but mine looks like he crawled off the Island of Dr. Moreau. Actually, on second thought, I will admit that when I am not stoned, he looks more like Ray Donovan's older brother who – and let's just be brutally honest here – consistently bats way out of his league on that show, leading me to believe that at some point an 8-inch penis is going to unspool from his stained cotton sweatpant jorts during some squalid, dingy apartment sex scene and justify his Clooney-level swordsmanship.

As the baker's dozen of politically active stoners like to say when they're not baked, "Marijuana is a miracle drug." I wholeheartedly agree. There are millions of people in America who would be complete assholes if their sharp edges weren't filed down a bit by a regular dose of THC. They walk amongst us every day and unconvincingly try to reassure us that they're chill as they lose their shit over something totally inconsequential, like who ate the rest of the Funyuns that were on top of the refrigerator the night before – with Funyun breath, of course.

Don't get me wrong. I don't mean to portray all pot smokers as binge eating, raging psychopaths who have simply found a reliable way to medicate away the least attractive part of their personality. That would be much too simplistic a declaration for this weekly spiderweb of half-baked observations and theories. The truth is that pot, like most drugs, is pretty fucking wonderful when used recreationally. The problem happens when people try to make recreation a full-time occupation. We both know what happens then. Shit doesn't get done.

I have been so high, I felt like I couldn't move. That is OK if you're listening to The Dark Side of the Moon, but it's pretty fucked up if you're watching a toddler sprint toward a busy street. Parenting unfortunately requires you have your shit together at all times because kids, fundamentally, are fucking stupider than even you on some really strong weed. Somebody has to show up.

So my suggestion is this: Tell him it's his baby and that you need him to get his shit together starting yesterday. Truthfully you never know what it takes to sober someone up. He'll have several months to prove his mettle, and if he doesn't, your conscience is clear.