Wallowing in a huge pig trough of hubris and mendacity

My girlfriend's parents are definitely off their rockers about President Trump. In their eyes, he can do no wrong. Every time I see them (which isn't all that often) politics is the main topic of conversation, and it always ends up confrontational. They also regularly post conservative memes on my Facebook feed, which is starting to be a problem because my friends keep asking me why I don't unfriend them, and I have to say, "They are my girlfriend's parents." I am at a breaking point, and their posts keep getting crazier and crazier. Should I unfriend my potential in-laws?

No, don't unfriend them, just go into your settings and toggle on the switch that allows you to review posts added to your timeline. That way you can just disapprove any posts they try to add to your timeline. There is a bit of maintenance involved, but the upside is that if they ever post that video of a turtle having sex with a shoe, you can sincerely approve it because that shit is ridiculously funny. Anyone who doesn't find it funny should be burned as a witch. I don't think I have ever suggested that before, so you know I'm serious. Just approve the fucking video.

Here's the deal: We all have annoying people in our lives. Sometimes they're almost relatives. Sometimes they are even us. I can state with absolute certainty that I am regularly told that I am annoying [Ed. note: True.] – not just when I am audibly humming "Total Eclipse of the Heart" in the checkout line at the grocery store or when I get drunk and start proselytizing about the superiority of Billy Jack, or when I go on a rant about the inferiority of coffee as a beverage (It's fucking bitter. End of story.), but just at least once a week about something relatively minor like changing the channel every time a Beatles song comes on.

It's tough enough having wildly differing opinions on things that don't actually matter, but it's even tougher when they do. For the last year we've all been wallowing in a huge pig trough of hubris and mendacity and we're all rightfully a bit freaked out. We thought the system was basically working and now we are having the rather sobering realization that it might not.

The one thing that is certain is that things are only going to get crazier and crazier if we continue to give voice to the craziness. As fun as it is to watch the bonfire of insanity play out in social media, it's probably best to just let it burn out in whatever dark corner of the internet it came from. Bad ideas have bad consequences – just like bad advice. 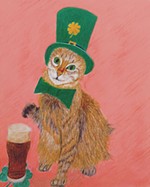