The Luv Doc: Hot for Teacher

It's not easy to steal your daughter's boyfriend 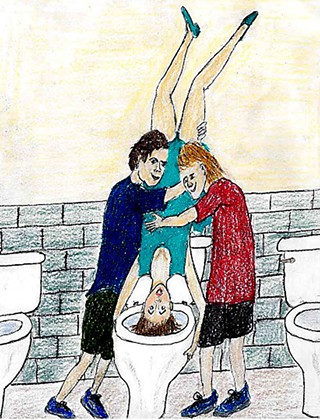 I have a huge crush on my daughter's second-grade teacher. I think she likes him, too. I don't think he's married, but he might have a girlfriend (or boyfriend ... he's THAT good-looking). Should I try to date him, and if so, how should I approach him? He seems like a very nice guy and I don't want to embarrass him or put him on the spot.

Hmmm ... that's a tough one. So your daughter likes him, too? Do you mean likes likes? Because if you do, that's going to require a pro level of finesse. It's not easy to steal your daughter's boyfriend ... even if he's already married. Adults can be pretty mean about that kind of thing, but schoolchildren are straight up vicious. Feel free to take your chances, but don't be surprised if she hires a couple of fourth-graders to give you a swirly in the girls' restroom during recess.

Even if you feel like you have your daughter squarely under your heel, there are other issues at play. For one, your daughter has the remainder of this semester with this fellow, and very likely another 3-4 years with him wandering the same halls. Let's say just as a for instance, that after a month or two, things don't go so well with this fellow. Maybe you find out that he isn't willing to leave his wife ... or that he replaces the toilet paper spool side under, or that he likes the Beatles more than the Stones ... or even worse than that, he likes Ted Nugent (I mean the man, not the music). You're unquestionably going to end up in a booze-fueled screaming match on the front lawn at 3am and you know who is going to be the real victim? You guessed it.

Of course, things could go right as well. This teacher might just be the best thing that ever happens to you ... I mean, not counting a really good hit of heroin. You might fall deeply, helplessly in love with him and end up boiling bunnies in his kitchen to try to get him to leave his wife/girlfriend/boyfriend. Hey ... you don't know. Even in a less mental scenario, you might end up getting caught dry humping him in the hallway before your parent-teacher conference or writing "I love you" on his windshield with lipstick in the faculty parking lot. I know that wouldn't necessarily be embarrassing for you, but it can be emotionally scarring to a second-grader – especially if your mascara is really smeared in the YouTube video.

So, short story long, if you absolutely have to tap that ass, do it on the sly – and not just so his wife/girlfriend won't find out. Statistically, your relationship with your daughter is going to outlast any relationship you might have with a man, no matter how dreamy. Seriously, if he is not still hot after nine years when your daughter is finally out of the house, was he really that hot in the first place?