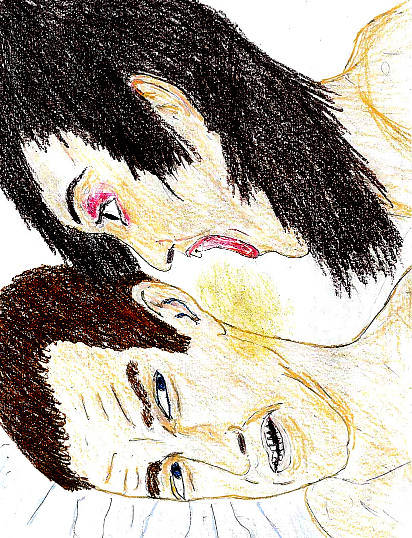 Last night I spent the night with my boyfriend, and this morning when I woke up I wanted to brush my teeth so I could go back to bed and make out with him ... which I did ... but later when he found out I used his toothbrush he totally freaked out and yelled at me about how gross it was – AND WE HAD JUST MADE OUT. Was it wrong of me to use his toothbrush? Even if I rinsed it out really well?

Wrong? I would say you are the hero in this story. I mean, you didn't totter back to bed after your morning post-sex pee with the rotting remains of the previous night's broccoli casserole still in your teeth. You took personal responsibility for your oral hygiene and you know who was the beneficiary? Your boyfriend. How dare he impugn your method!

I don't know if there are any hard statistics on this, but funky morning breath (hereinafter referred to as "FMB") has probably tanked more relationships than stained underwear, fungus infested toenails, or embarrassingly bad hidden tattoos ever did. Who hasn't rolled over in bed and caught a whiff of their partner's breath after a hard night of drinking Red Bull and vodkas and binge-eating mustard sardines and thought, "I need to get back on Tinder."

FMB can turn a 10 into a 2 quicker than you can whistle Dixie. It doesn't matter how tight your lingerie game is or whether you shop for Magnums in the condom aisle, if you wake up in the morning and try to start a game of tonsil hockey while your breath still smells like actual ass, you are not getting a callback. More than likely your significant other will ask you to go get coffee and then deadbolt the door when you leave. And then throw your clothes out the window.

And you can't just Donald-Trump-Tic-Tac away real FMB. That's like spraying Axe on carpet vomit. You have to get in there and deep clean that shit until your teeth feel as smooth as when you walk out of the dentist's office. You have to brush your tongue. Twice. Maybe three or four times if you didn't know that was an actual thing. Mouthwash. Rinse. Repeat.

Now, as to your boyfriend getting his undies in a bunch about you using his toothbrush, well, he might want to brush up a bit on his epidemiology. Mouths are undoubtedly festering cesspools of bacterial flora, and while it's probably not a good idea to make your toothbrush open source, it definitely isn't going to put you more at risk for contagion by sharing it with someone you've recently been snogging.

So, if after explaining your heroism your boyfriend still doesn't get it, I suggest you eat a big dinner of pad thai with fish sauce the night before and then, without using his toothbrush, kiss your angel good morning.