11 verses in search of a song

Start talking again, when I know what to say – "Clay Pigeons," Blaze Foley

Blaze Foley is back in my life, though – and somewhat unusual for him – not in a disruptive way this time. Life changing, sure, but Blaze always played where the minimum required was everything you had.

I've become old and safe not even able to remember the last time I went off in a rage, racing toward the horizon ready to do battle without any idea as to even what war I was fighting. Then, every step was a gamble, almost always one of life or death. Now, no matter how risky the game, even when the stakes are way beyond rational, there is almost never any bet that I can't afford to lose.

Foley knew only one real speed – pedal to the metal forward. Not interested in the center, he went to the edges; bored by calm he searched for whirlpools. If they couldn't be found, well then he created one. Usually gambling with far more than he had, he bet it all – his life, his talent, his music. Maybe it was a strategy, maybe a vision, or maybe it was the only way he knew. When he finally lost, he lost big, but maybe that was only in the short game.

A brilliant songwriter and stunning performer, his consistent bad luck recording and releasing his music was of such tragic proportions as to match Ulysses' tortured and damned journey home. Foley's songs, so carefully constructed with every unneeded word eliminated, achieved grace. Yet in person he often pushed too hard, managing to get himself banned from just about every music club in town. His one refuge was the Austin Outhouse, because even when banned there, as he often was, neither management nor he expected it to stick. Using duct tape to accentuate and mend his clothes until he was basically bedecked in it, pointing out that the BFI stenciled on dumpsters meant "Blaze Foley Inside" (which was often true), he helped work his own legend, capping it off by being killed senselessly trying to protect a friend.

By then Merle Haggard and Willie Nelson had already covered "If I Could Only Fly." After his death, close running buddy Townes Van Zandt wrote "Blaze's Blues" while Lucinda Williams in "Drunken Angel" asked, "Why'd you let go of your guitar/ Why'd you ever let it go that far/ Drunken Angel."

Despite everything else, there are the songs. A legacy determinedly kept alive by friends like Mandy Mercier, Pat MacDonald, Barbara K, John Casner, Sarah Elizabeth Campbell, Champ Hood, and Pat Mears, as well as his fans and songwriters everywhere. Kevin Triplett barnstormed the country and the world showing his documentary Blaze Foley: Duct Tape Messiah wherever he could, at festivals and clubs, in bars and theatres, often accompanied by a performance by Gurf Morlix, supporting his tribute album of covers, Blaze Foley's 113th Wet Dream.

I'm writing this now because I've been listening to Foley a lot lately. Especially the so beautiful "Clay Pigeons" – over and over, often finding myself softly beginning to cry. A verse rich in Edward Hopper-esque detail followed by one that is more a world-weary sigh, together evoke fevered dream memories. How fate can conspire against you, tripping you up at the most inappropriate of times. But when knocked down, it is your decision as to whether you are going to get up or let it take you out.

Change the shape that I'm in

And get back in the game and start playin' again

Have you ever messed your life up so bad you couldn't imagine ever getting it back into shape? Lost in a narcoleptic state of half-waking from not-even-really-sleeping, lying in bed not just unwilling but actually scared to get up. Feeling so helpless in the damage you've done to yourself that you sink down and then farther until finally so sunk down you can go no deeper.

Eventually, usually when you least expect it, you start to return, because what else is there?

Sing a song with a friend

Change the shape that I'm in

And get back in the game and start playin' again

As rich the imagery of "Clay Pigeons," though set on a bus, it really charts the crazy currents of a creative life. Still for so long, I only really listened to the song's beginning:

I'm goin' down to the Greyhound station

Gonna get a ticket to ride

Gonna find that lady with two or three kids

And sit down by her side

Ride 'til the sun comes up and down around me

Too many times young and broke, running away from what was being left behind rather than in any way heading toward something, I rode on Greyhound buses watching long nights float by, always from a far back seat. In the dark, my body awash in the molten lava of stomach fluid and battery acid emotions, I sat alone far from any other passengers. When I did see them, I always thought how much better their lives had to be than mine.

"Clay Pigeons" is a song of loss and survival, of travel lacking destination. Stubborn without style, there is a kind of perseverance not driven by any determination but simply because what else is there? Feeling empty and damned, watching a far distant dawning slowly seep through the black night as the bus continues forward. Finding that every breath out empties your soul.

And get up in the mornin' and go out at night

And I won't have to go home

Get used to bein' alone

Change the words to this song, start singin' again

Combining details and ideas, suggestions of experiences with hints of tragic failings, the song threads despair with hope, solitude with memories of love. The lyrics connecting and interacting with such fluidity as to make each listen seem as though to a somehow different song.

Often within a song, no matter how lyrically sparse, Foley offers ever-layered poetic fragments, making meaning more by suggestion than explicit rendering. Thus the song is constantly focused and refocused by the storms and calms of an encyclopedia of one's emotions.

Playing "Clay Pigeons" is to hear a song remembered but not memorized. The first play may find the song seeming to be so filled with hope. But another listen finds it much darker, alluding to a tragic past. Still another time finds it a lament of despair, a tone of deep emotional claustrophobia offering the most narrow of focuses, where there is nothing but the bus endlessly driving through the night. Yet on another play the song expands, suggesting that leaving the bus at the end of the journey creates an opening up, not a closing down. Even accepting the likelihood of future tragedy, one begins to breathe again, no longer so confined by the weight of emotional doubts. It isn't as though great achievement is immediate but rather that darkness no longer completely smothers light. Beginning to dream is the first step away from the smothering mundane. Possibility thus allowed, the direction is ahead, and even if slow the movement is finally forward.

Count the days and the nights that it takes

To get back in the saddle again

Feed the pigeons some clay, turn the night into day

Start talkin' again, when I know what to say


It's a Saturday morning, and I'm lying on the living room couch listening to Blaze Foley's new album. The people downstairs seem to be smoking a lot of pot or else there's a brushfire of the stuff somewhere in the neighborhood; the unexpected cool of the day is welcome and Foley's voice and lyrics put it all into focus, recalling different mornings in different places, good times and bad times.

Every time I listen to Foley, I try to figure out how he gets so much mileage out of so little. His songs are far from word-heavy and most of the lyrics wouldn't translate well onto the printed page, but when you hear him sing, he tells you where he's been and what it's like to be there. Since I've been in some of those places, listening to him has as much to do with memory as it does with exploration.

The album was produced at Muscle Shoals, and though at times it reminds me of some of my favorite records produced there, at other times the production gets in the way – a little too elaborate for some songs, a little too slow for others, maybe a little too repetitious overall. Still, Foley's biggest problem with this record is going to be that it's so hard to categorize. The songs combine elements of R&B, country, and folk in such extraordinary ways that it becomes difficult to label this album as any one type of music. Except fine music, which is what it is.

I'm remembering mornings spent on floors, on beds, on couches. I'm thinking of going downstairs and meeting the neighbors. I'm about to make one of those calls that never work out – that just end up with too many different kinds of goodbyes and no hellos. I'm feeling hung over even though I didn't drink anything the night before, and I keep listening to this album over and over. 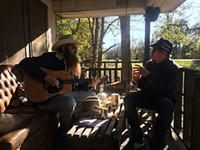