Page Two: The Apache Wars in History and Myth 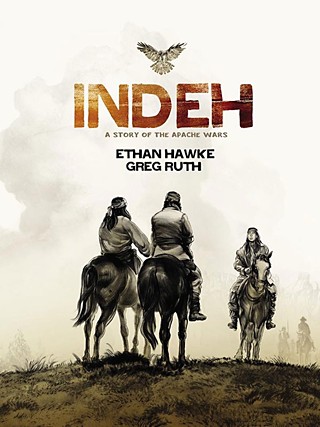 "Those who cannot remember the past are condemned to repeat it" sounds wisely observant but has always rung false. Rather than providing much guidance for the future, history seems to far more often be used to manipulate and inflame mob passions and attitudes.

Demonstrating that no matter how weak his work, all the conservative propagandist Dinesh D'Souza has to do, in Hillary's America, for example, is tell his audiences exactly what they want to hear. Already knowing that what they know is the truth, only seeking affirmation, they are disinterested in accuracy.

Long a philosophical battlefield in the culture wars, history is no longer even vaguely tied to any reality. Instead, just stating "You can't face the truth" triumphantly proclaims the ignorance and mendacious stupidity of those in disagreement.

Indeh: A Story of the Apache Wars (Grand Central Publishing, 232 pp.), a graphic history by Ethan Hawke and Greg Ruth, is relevant, timely, and appropriate, given the current deeply troubled public controversy over race, heritage, and religion. Sympathetic to the Apache, Indeh inherently explores how racism and prejudice distort history. The authors understand that unfortunately people who are oppressed achieve no grace or nobility through that oppression. Instead, oppression – especially institutional – is often deeply destructive, leaving those affected crushed and crippled, in body and spirit.

A story of violence on all sides – the government's genocide, forced dislocation, and ongoing mistreatment of Indians; the Native Americans' brutality and capacity for savage violence – the context of Indeh is the United States' unending, uncompromising war against the Indians. Over much of the last century, the portrayal of these wars in American popular culture and history has been overtly sympathetic to manifest destiny, that it was not just inevitable but desirable that this country expand westward until it stretched from ocean to ocean. Western pioneers were the secular missionaries of American Exceptionalism, taming the Wild West, the Indians just an aboriginal impediment to the greatness of the New World.

At its simplest, in films, pulp magazines, and Western adventures, this was good guys vs. evil – the settlers, frontiersmen, and soldiers fighting the vicious Indians. More sympathetic portrayals, though once few and far between, recently have come to prevail. In this idealistic view, Indians, personifying the noble savage, demonstrate the superiority of nature over civilization.

Indeh, working hard at being a serious history, avoids the classic mistake of bestowing on these fierce warriors a nobility having more to do with an idealistic Western humanist sensibility than their lifestyle. Indeh follows the history of the Apache people being attacked, persecuted, and often slaughtered in the U.S. government's campaign against them. Honoring neither signed treaty nor promise, the U.S. would use any excuse to renew the war. Apache warriors were fighting for their survival against an ever-spreading Western civilization determined to take their lands and, if not exterminate them, at least completely subdue them by destroying their culture and identity.

Uniquely, Indeh is a history that accurately relates the treachery and violence against the Apache without homogenizing them into a more civilized, values-friendly people. Ruth's art brings the story home, capturing the realities of life in the West without losing its greater sense of mythic vision. Not just a stylist but a naturalistic storyteller, this graphic novel drives like a great movie.