My boyfriend is always late to everything. He is routinely 10-20 minutes late every time we go out or meet somewhere. We are always late to movies or plays or parties. The worst thing about it is that he makes me late and I am not a late person. Yesterday, his doctor canceled his appointment because he was 40 minutes late. He was so mad about it, but it was his fault and he can't even see that. What can I do to get him back on schedule?

Oh, how I do love an easy answer! Yay! OK, here it is: Stop waiting. Yeah, fuck that guy. Or rather, don't fuck that guy. Instead, fuck the one who cares enough about you to actually show up on time. Better yet, fuck the one who shows up just a little bit early because he's so excited to see you. But this guy? I don't care if he rescued a litter of puppies from a house fire or discovered a cure for leukemia or even if he looks like Paul Walker (R.I.P.), drives a Lambo, and benches a nickel. If he habitually leaves you hanging, F that D – mainly because of the Lambo, but also for the lateness. The lateness thing is like a solid second.

Since you're probably new at this, I should get a little more specific: Leave. Let's say he's supposed to pick you up for a movie at 7. If he's not there at 7, go to the movie without him. What? Are you embarrassed to go to a movie alone? You should be more embarrassed to be dating someone who considers you an afterthought. Actually, maybe I shouldn't give him credit for considering you at all.

I read an article not too long ago that said optimistic people are habitually late – mainly because they believe they can accomplish more than they actually can before it's time to leave. That sounds totally reasonable. Who hasn't decided to start a game of Risk right before they had to be at a funeral? Or decided to give the cat a bath right before a big job interview? Or started a bathroom remodel right before Thanksgiving? I will tell you who: a dumbass. Calling someone who does harebrained shit like that an optimist is, to keep it 100, highly optimistic.

Being a bit of an optimist myself, I have found that the only real cure for optimism is a heavy dose of reality. Currently your boyfriend's reality is that his girlfriend will wait on him for as long as it takes him to get there ... every time. Until you change that reality, he has no reason to change his behavior. 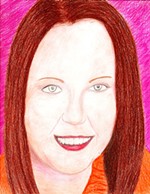 The Luv Doc: Demon Sperm
Or the danger of a couple of bucketfuls of errant, herpetic, demon ejaculate