In which the Luv Doc reveals an unshakable truth, a pipeline to the Godhead 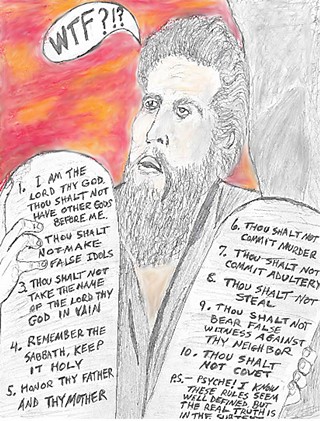 You're a jokester, so maybe you can weigh in on this. I love my boyfriend. He has a great sense of humor, but he is always joking around. ALWAYS. We can never have a serious conversation about anything. At first I thought it was cute, but more and more it is really getting on my nerves. What can I do to get him to stop trying to be hilarious and just be real?

Serious, this sounds really sad. Are you sure your boyfriend is funny? I have noticed that sometimes there is a huge difference between "trying to be hilarious" and "hilarious." Unfortunately, failure doesn't always keep people from swinging for the fence. Once people get it in their heads that they're funny, they will work that shit like an ugly stripper. It can be really tough to watch ... like a snuff film, or C-SPAN, or an Adam Sandler movie. For the moment, however, I'll just assume your boyfriend is a living reincarnation of Bill Fucking Hicks.

Question: Why would you want to wet-blanket that brilliance by yammering about your feelings, your asshole boss, or your plans for the future? If you need to "process" there is a place for that. It's called "Reddit," but beware the trolls. Honesty and sincerity can take you to some dark, disturbing places – especially when people aren't required to reveal their identities.

Then there's that whole emotional intimacy thing. Ugh. What even is that? Closeness? Connection? Empathy? Why can't people connect through sarcasm? That would be a very special bond, wouldn't it? Sadly, most people are just too insecure to base a relationship on a shaky interpretation of someone else's sarcastic intent. It would be like God handing Moses the Ten Commandments and saying, "I know these rules seem pretty well-defined, but the real truth is in the subtext."

Subtext is the dark matter of communication, isn't it? And in this dizzily spinning, ever-expanding, shape-shifting universe, all we really want is something rock-solid we can cling to, a sentence underlined in red that reveals an unshakable truth, a pipeline to the Godhead. Well, guess what, Serious? Our creator – cosmic thunder muffin, hairy spaghetti monster ... whatever she is – only reveals herself through implication. Facts become malleable as the theories evolve.

It's fucking maddening is what it is – never knowing the actual truth – always being galled/dumbfounded by the ironies, incongruities, and injustices of day-to-day existence ... never truly knowing what is real. It's no wonder your boyfriend has developed his pathological defense mechanism. It could be worse. He could be serious. Even still, if you want to train the comedy out of him, just keep reminding him that funny isn't funny when it's annoying. Maybe someday he will learn the difference. 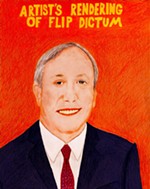