A friend of mine has been dating a "waitress" who is an "artist" for about a year. At our tailgate last weekend they announced that she is moving in with him. The reason for the quotes is that she is a horrible artist (don't worry; she won't see this – she never reads anything) and she only occasionally works as a waitress. Mainly she sponges off my friend. He pays for everything and she is never shy about asking him to pony up. If she starts living with him he is going to be bankrupt in no time. Should I host an intervention or should I let sleeping dogs sleep at his place? – Pluswelostthegame 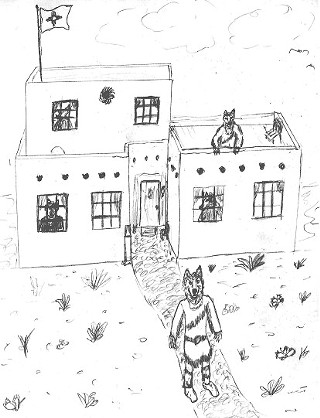 An intervention sounds like a lot of work. You're going to have to pick a time and a location, and somebody is going to have to get some snacks – at least some Goldfish – and then you have to make sure everyone's relatively sober and on the same page about the artress/waitist. You may hate her art, but some of your friends might actually dig it.

I have an ex-girlfriend who – I am told – made a killing in Santa Fe a while back selling Southwestern-themed dollhouses populated by tiny wolves instead of tiny people. Now, mind you, she was from Oklahoma, so "a killing" might just have been enough scratch to buy a few ounces of biker meth, but the point is, when it comes to art, there's no accounting for taste. One man's mulligan is another man's Pollock ... or Mapplethorpe.

Not to mention that becoming a decent artist (or even waitress for that matter) takes a long time. Most artists don't fire out of the blocks with a Mona Lisa or a Water Lilies or a Dogs Playing Poker. No, you have to earn that shit through years and years of dedication to your craft. This woman might easily take a few decades of expensive patronage before she arrives at hard-earned mediocrity, but give her credit. At least she is doing something with her free time other than sitting around watching Big Bang Theory reruns. That show is harder to watch than a mash-up of Human Centipede and "Two Girls One Cup" ... and not nearly as funny.

Now, about that money thing: Yes, it's disturbing watching a friend blow his money on something other than good Scotch and 50-yard-line chair-back seats, but that sort of shit happens all the time. You have probably already discovered that it's really hard to convince someone they shouldn't be happy when they already are. Sounds to me like your friend is quite content with his investment – enough so to take it to the next level. Some people blow their life savings on shitty suburban homes and ugly cars and abominable furniture and aren't any better off on the happiness index. Would you have an intervention for a friend intent on buying a Prius? No? Then back up your fucking high horse and trot it out to IKEA for a housewarming gift.