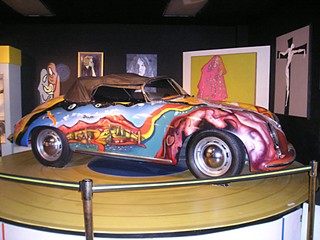 Janis Joplin's 1965 Porsche with the psychedelic paint job is not for sale. At least not the replica of the famous car in Port Arthur's Museum of the Gulf Coast. Sotheby's announced the Port Arthur native's real Porsche Cabriolet will be auctioned on Dec. 10, 2015. The car has been garaged in Cleveland's Rock & Roll Hall of Fame for the last two decades.

The Port Arthur museum has had the replica for at least that long. David Beard, the museum's director, says the car on display isn't even a real Porsche. It's a kit car. Houston artist Brian Gies re-created the paint job. "We have a lot of people coming to the museum just to see the car," Beard says. "It's part of a pilgrimage to visit Janis' hometown."

Joplin drove the car until her death in 1970. "My understanding is her brother Michael drove it for many years," Beard says. It was offered for sale at one time for $200,000, but the museum didn't have the cash. It sure can't afford the $400,000 or more the car is expected to draw.

In the meantime, Beard is trying to figure out how to raise half a million dollars to bring Joplin's psychedelic Porsche to Port Arthur.

The Museum of the Gulf Coast is at 700 Procter St. in Port Arthur. Among the history exhibits, the museum's hall of fame tips a hat to 169 celebrities who hail from the area. For information, call 409/982-7000 or go to www.museumofthegulfcoast.org.