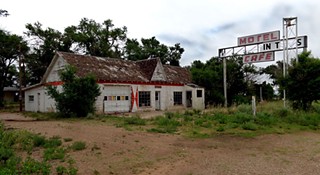 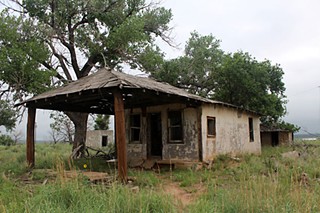 The State Line Motel in Glenrio, on the Texas side of the border with New Mexico, proclaimed it was the first or last motel in Texas, depending on which direction you were traveling on Route 66. 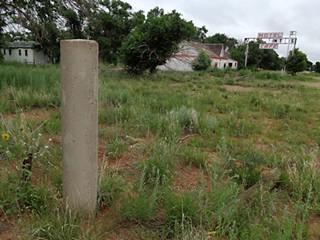 Glenrio's dot on the Texas map marks a ghost town. The skeletons of once-bustling hotels, gas stations, and stores stare blankly at an empty remnant of "The Mother Road." 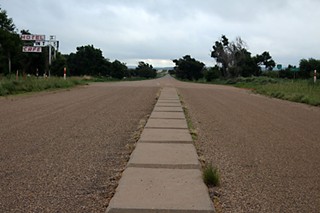 Once-prosperous small towns began to fade when Interstate 40 replaced Route 66. Less than a mile off the interstate, by 1976 Glenrio couldn't attract enough motorists to survive. A diamond-shaped concrete post surrounded by weeds and empty buildings marks the state boundary.

At its peak, Route 66 snaked 2,451 miles from downtown Chicago to the Santa Monica beach. Remarkably, motorists can still drive on 90% of the 178 miles of the romantic highway across the Texas Panhandle. The once mighty two-lane road is reduced to serving as frontage road to the interstate or the main bypass through dusty small towns.

Never very large, Glenrio was founded in 1903 as a water stop for the railroad. The first hotelkeeper arrived in 1917, but the real growth began in 1927 with Route 66. The liquor stores were on the New Mexico side and the gas stations were on the Texas side. Curio shops were on either side of the border. It all began to unravel when I-40 opened. The ghost town became a National Historic Place in 2007.