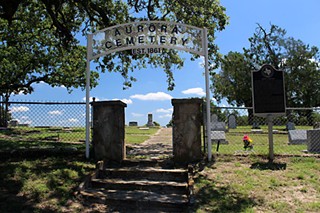 The airship that destroyed Judge Proctor's windmill, water tank, and flower garden in Aurora left behind more mysteries than debris. 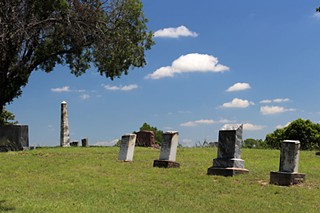 An article in The Dallas Morning News on April 17, 1897, says residents of the community north of Fort Worth were awakened early in the morning by an explosion. Sifting through the aircraft's wreckage, residents found a body "that was not an inhabitant of this world."

According to the article's author, S.E. Haydon, an officer of the U.S. Army Signal Corps and expert on astronomy speculated that the pilot was "a native of the planet Mars." No explanation was given as to how the official knew what a person from the faraway planet might look like.

Supposedly, the pilot was buried in the Aurora Cemetery and the wreckage was dumped down the judge's well. No concrete evidence of the spaceship has turned up after 118 years of searching by UFO investigators, but conspiracy theories abound.

One of Haydon's contemporaries accused him of being the town's practical joker. Several commentators have suggested that he was trying to prop up a fading town struck by a series of disasters. The 1986 movie The Aurora Encounter helps keep the legend alive.

The Aurora Cemetery, where the spaceman is supposedly buried in an unmarked grave, is a few miles west of U.S. 287 on Cemetery Road, off TX 114 between Rhome and Boyd. Aurora is a smattering of homes, but the historical marker at the cemetery mentions the extraterrestrial legend. So it must be true.