The Luv Doc: A "Love Connection" 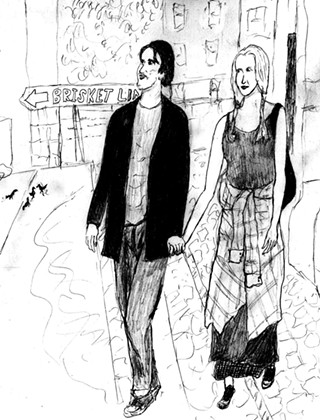 Dear Luv Doc,
I know a man five years younger than me who lives in a different city, but we grew up together and recently had a “love connection.” Should I pursue this even though it’s long-distance? I don’t plan on leaving Austin.
– Connected

Sounds to me like your “love connection” was a physical encounter – at least based on the use of the word “had,” which implies that it was of a temporal nature. Furthermore, the use of sarcastic quotation marks leads me to assume “love connection” is an adorable euphemism for some unnameable act like sex in the missionary position. If so, thanks for sparing me and my readers the indelicate thoughts we surely would have conjured if you hadn’t softened the blow with a tastefully obfuscating euphemism. Actually, I am pretty sure everyone else immediately substituted the phrase “dry anal” just like I did, which just goes to show you have to be really careful with euphemisms.

Regardless, let’s just assume for a moment that your “love connection” didn’t involve gritted teeth, white knuckles, and forehead sweat. Maybe you walked around Vienna all night making chin music just like Jesse and Celine in Before Sunrise … or maybe you did something even more perverted like graffiti knitting or playing Whac-A-Mole at Dave & Buster’s. Doesn’t matter. Somehow you got a hankerin’ for this young(er) fellow and now it haunts your dreams and makes you wistful for what could be … well, if “could be” wasn’t such a long goddamned drive.

So, Connected, if you’re looking for me to put your mind at ease by saying that it’s just not practical to engage in a long-distance relationship, you’re humping the wrong Luv Doc’s pants leg. Do you really want to be in a relationship that you’re not willing to travel for? Are you telling yourself it would be OK to fall in love with someone only as long as they are in your same apartment complex? Are you saying that Austin is so great that you would rather endure a lifetime of regret and second-guessing just so you can hike the greenbelt and wait in line for two hours at Franklin? I will admit that is some good fucking barbecue, but goddamn.

One more thing – and please hold your stones until the end of this sentence: Austin is a great city, but it’s not the best city in the world. Not by a long shot. If you’re laboring under that idiotic misconception, you need to do some traveling. Austin is a magical place precisely because its residents refuse to acknowledge the reality of their actual circumstances. Love has obscured their ability to think rationally … and isn’t it wonderful? I say, rationality be damned and pass the brisket.