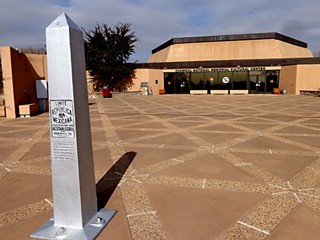 Chamizal National Memorial is a quiet place with a contentious past. For more than 100 years it was disputed territory between El Paso and Ciudad Juárez. Now it is a peace park near the international bridge. The Rio Grande represented the international border after the Mexican-American War in 1848. As rivers tend to do, the Rio Grande kept shifting. The island created between channels became a no-man's-land claimed by both countries. A summit with presidents Porfirio Díaz of Mexico and William Howard Taft sent the dispute to arbitration. Neither side, especially the United States, liked the ruling of the International Boundary Commission, so the bad feelings festered from 1911 until 1963.

President John F. Kennedy agreed to the 1911 arbitration decision. On Sept. 25, 1964, Presidents Lyndon B. Johnson and Adolfo López Mateos met at the site of the current visitor center to unveil the new boundary marker.

One of the results of the agreement was that the Rio Grande became a concrete channel marking the border through El Paso. At sunset, from the Wyler Aerial Tramway and Ranger Peak, the street lights following the channel snakes across the cities.

Chamizal National Memorial is not one of the spectacular national parks, but it does have important significance. The old boundary markers still line one edge of the park that surrounds the visitor center. The small museum tells the story of a border dispute solved by diplomacy. See more info on the park at www.nps.gov/cham.