The Luv Doc: Friends With Benefits

Some people don't like peas all up in their carrots 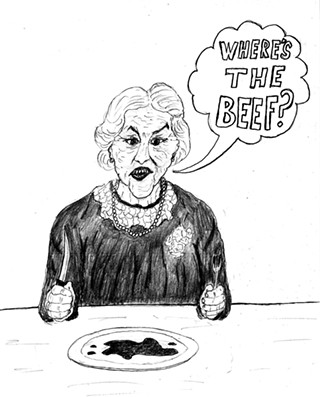 Dear Luv Doc,
My friends say I am cold because I only call my FWB to have sex. Do you ever call FWBs for anything else?
– Bitchy FWB

Dear Bitchy,
Are you one of those people who likes to separate all the foods on your plate? Peas in one pile, carrots in the other? A clean, demilitarized zone between them? Just wondering. There are plenty of people in the world who don’t like their peas all up in their carrots. I would call them segregationists, but that makes them seem like the type of people who want to keep Jefferson Davis’ statue on the South Mall.

Then again, you might not be a segregationist, but simply one of those people who feel there is an order to the universe that must be maintained; lines that should not be crossed. Perhaps you believe, in the words of Tilda Swinton’s Minister Mason in Snowpiercer, that “a shoe should be a shoe.” Fair enough, and a FWB should STFU and get busy benefiting, right?

Well, sort of. I know I am splitting hairs a bit here, but “friends with benefits” implies - or rather, “denotes" - that the friendship is primary and the benefits are secondary. You wouldn’t order steak with a red wine reduction sauce and expect to only get the sauce, would you? No. You would be screaming, “Where’s the goddamned beef?!?!” Similarly, perhaps your friend feels that she/he is getting all sauce and no steak.

All sauce is not a bad thing per se. Sauce can be damned tasty, but it’s not very filling, and if it’s the only thing you’re serving, it’s best to be upfront about it. So maybe henceforth, instead of calling her/him your FWB, maybe try out the term “fuck buddy,” so that the emphasis is in the right place. As an added “benefit,” you can shorten your acronym to “FB.” My guess is that with all the benefiting, you don’t have time to waste on extra syllables.

A bit of caution, however: Regardless of how well you think you can separate the physical from the intellectual (the fucking from the friending) consider the possibility that you may be fooling yourself. Sex is an intimate act - even with a complete stranger. It’s much easier to maintain detachment from a stranger than it is with someone you see on a regular basis. Be careful, or your fuck buddy might end up becoming a friend with benefits.

Like good sex, friendships can be really messy. Carrots get all up in your peas and sometimes you can’t tell whether you’re tasting the sauce or the steak but it doesn’t matter because it’s fucking delicious and you wouldn’t have it any other way.